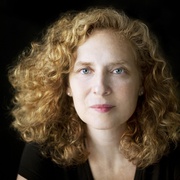 Julia Wolfe graduated with a Master of Music from Yale University, where she studied with Martin Bresnick, and then obtained Doctorate from Princeton University. In 1987, along with David Lang and Michael Gordon, whom she met at Yale, she founded the Bang on a Can Ensemble, of which all three composers remain the artistic directors. Every year, Bang on a Can organises and performs in a series of Marathon Concerts which take place in the Winter Garden of the atrium of the World Financial Center in Manhattan. She has composed several works in collaboration with David Lang and Michael Gordon, including The Carbon Copy Building (1999), Lost Objects (2001), and Shelter (2005). Julia Wolfe is also the artistic director of the composition programme at the New York University Steinhardt School.

In her works, Julia Wolfe draws inspiration from folk, classical, and rock music, lending an intense physical dimension to her music which often pushes performers to their limits. Her predilection for combinations of string instruments, be they quartets or ensembles, is manifest in works such as Cruel Sister (2004) for string orchestra, based upon an English ballade and commissioned by the Music Chambre Orchestra; Fuel (2007) for string orchestra, composed in collaboration with director Bill Morrison; and Spinning (2018) for three cellos and vocalist, a multimedia work written for cellist Maya Beiser.

Her music has been performed in the United States — at the Brooklyn Academy of Music, Lincoln Center, and Carnegie Hall — as well as at the Sydney Olympic Arts Festival, Muziekgebouw (Netherlands), Barbican Centre in London, Settembre Musica in Italy, and at the Théâtre de la Ville in Paris, and has been recorded by Cantaloupe Music, Teldec, Universal, Sony Classical, and Argo/Decca.

In 2015, her oratorio Anthracite Fields (2014) for choir and ensemble, a commission of the Mendelssohn Club of Philadelphia, was awarded the Pulitzer Prize. This piece commemorates the coal miners who worked in north-east Pennsylania, with a text using the testimonies (oral history, interviews, and speeches) of these individuals. In the same year, she received the Herb Alpert Prize, and the following year, the MacArthur Prize. In January 2019, the New York Philharmonic premiered Fire in my mouth for orchestra and female choir. In this work, Wolfe further explored the history of labour in the United States, focussing on the role of women in the clothing industry in New York at the beginning of the 20th century.

Her works are published by Red Poppy.