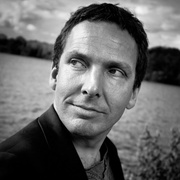 Jesper Nordin studied at the Stockholm Royal College of Music with Pär Lindgren and Bent Sørensen, at IRCAM with Philippe Leroux, and at Stanford University/CCRMA in 2004 (as a visiting scholar) with Brian Ferneyhough.

Having worked at IRCAM, GRAME, and CCRMA, he is also highly active in the field of electronic music, both as a composer and a performer.

He has received commissions from major institutions in several European countries, including the French Ministry of Culture for Undercurrents, composed in 2007 for cellist Benjamin Carat. He has also received numerous accolades, including the Christ Johnson Prize (Sweden) and a commendation in the UNESCO Rostrum International Radio Competition. From 2004 to 2006, he was composer-in-residence with P2 (Swedish National Radio’s music station), giving rise to the release in 2006 of a CD of his works titled “Residues.” Since 2008, his works have been published by Peters Editions.

Notable works include Circe for percussion and ensemble, premiered in 2012 by Jean Geoffroy and Ensemble Orchestral Contemporain at the Musiques en Scène Biennale in Lyon alongside Diffusing Grains for percussion ensemble; the Pendant (2009) cycle for chamber ensemble and electronics, commissioned by Ensemble l’Itinéraire; Aftermath and In the midst of Trespassing No 2, both premiered at the Takefu Festival in 2010; Lamento d’Arianna (2009) for mixed choir; and Width of a Circle for voice and chamber ensemble, premiered by KammarensembleN and Harmony of Voices, with Franck Ollu conducting.

Jesper Nordin has developed several iOS applications, including “Gestrument” and “ScaleGen,” inspired by his own compositional techniques. These tools have been used internationally by musicians working in genres from electro and techno to improvised jazz and new music.