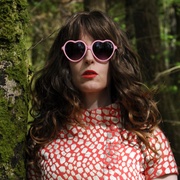 Having played the trumpet as a child in youth orchestras in Ireland, Jennifer Walshe began studying composition with John Maxwell Geddes at the Royal Scottish Academy of Music and Drama, and then with Kevin Volans in Dublin. She completed her dissertation in composition from Northwestern University in Chicago in 2002. It was during her studies that she became interested in American experimental traditions and discovered two composer-performers who would inform her artistic research: Laurie Anderson and Diamanda Galás. Walshe is a composer, singer (several of her pieces are written for her own voice), improviser, actor, feminist, and animalist. Her work is at the crossroads of poetry (her mother was a writer) and theatrical, political, and musical performance.

In 2003–2004, she was in residence at the Akademie Schloss Solitude in Stuttgart. The following year, she lived in Berlin as a guest of the DAAD Artists-in-Residence Program. From 2006 to 2008, she was composer-in-residence in South Dublin County for the art program “In Context 3.” In 2009 she lived in Venice as a guest of the Claudio Buziol Foundation.

Walshe has taught at the Hochschule für Musik und Darstellende Kunst in Stuttgart, where she co-created the master’s degree in Theory and Practice of Experimental Performance. She has also taught at the Darmstadt Summer School, the Venice Biennale, and Ostrava Days. In 2019, she was elected to the Berlin Academy of Arts and the following year to Aosdána, the Irish academy of artists. In 2021, she was appointed Professor of Composition at Oxford University.

Walshe’s music features electronics with a spotlight on the voice, for which she has developed various performance techniques. Her catalog includes numerous operas, including TIME TIME TIME (2019), Die Taktik (2012), The Geometry (2009), and XXX_LIVE_NUDE_GIRLS!!! (2003), an opera for Barbie dolls on the theme of rape, in the vein of Mozart’s and Haydn’s marionette operas.

The composer is also at the origin of several large-scale projects. One is the artistic collective Grúpat, created in 2007 and composed of twelve of her alter egos. The group has created installations, graphic scores, films, photographs, sculptures, and costumes. Another is the database Post-Internet Sound, developed with Holly Herndon and which seeks to document the relationship of artists to the Internet. Finally, the database Aisteach explores a fictional history of the Irish avant-garde since the mid-nineteenth century. In this collection, she questions what constitutes the artistic canon. By featuring many female and queer artists, Aisteach (which is Irish for “strange” or “queer”) carries a message as well as a political project.