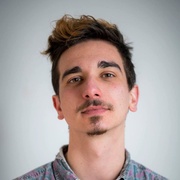 James Alexandropoulos-McEwan began his musical studies at the age of ten by studying classical guitar with a teacher and then teaching himself electric guitar. His first forays into composition were for indie rock projects in Athens. In 2016, he graduated with honors from the Birmingham Conservatory of Music with an undergraduate degree in composition. The same year, he won the Birmingham Chamber Music Society’s Composition Award, which was presented by Richard Ayres. In 2018, he completed his master’s degree in composition at the Royal Conservatoire The Hague, where he received a distinction “for the development of a new musical praxis and relationship with the audience through new techniques and technologies.”1 That same year, he was composer-in-residence at the Composer’s Kitchen, organized by the Quatuor Bozzini.

His work explores the space between contemporary classical music, offbeat rock, improvisation, and electronics. With the ambient noise project Flowers/Ghosts&Echoes and the Polyscope record label in 2019, he produced the album \\\\\ drift /////// flux \\\\\ change |||||||||. He also produced and now that we are here on the same label in 2020 with the group Quaich. Through careful juxtapositions and dense textures that mask elements of harmony and melody, he aims to create “coherent incoherence” and complex worlds in which listeners must find their own way and their own meaning.

A significant portion of Alexandropoulos-McEwan’s catalog is interdisciplinary and interweaves musical performances, installations, and audiovisuals. He has composed for various film projects, including the soundtrack for photographer and filmmaker Eline Benjaminsen’s Footprints in the Valley (2019) and the soundtrack for the four-hour video and installation Document created by Mihály Stefanovicz and presented in Tromsø, Norway, in 2020. The installations he works on often involve cobbled-together electronics, arrays of speakers of various qualities (blurry, glitched, and jumbled, 2018), and the audience’s smartphones as multimedia playback devices (Layers, 2017; More Layers, 2018; Detached [ but interconnected ? ), 2018; a/mi(d)st a/noise_and, -[d]is_interference///, 2022).

The immersive audiovisual work Detached [ but interconnected ? ) is the result of a commission by the 2018 CID Conference of the Municipality of The Hague. His piece a/mi(d)st a/noise_and, -[d]is_interference///, which was commissioned by the Time of Music Festival, the Gaudeamus Festival, and the Warsaw Autumn Festival, is touring five major contemporary music festivals in 2022, including Ircam’s ManiFeste Festival and Academy.

His other work has been presented at the Muziekgebouw in Amsterdam, the Casa da Música in Porto, the TivoliVredenburg in Utrecht, the Gaudeamus Muziekweek in Utrecht, Tectonics Athens, Music in PyeongChang, and the Onassis Foundation in Athens, as well as in Canada, South Korea, Germany, the Czech Republic, Malaysia, and the United States. Alexandropoulos-McEwan was a featured composer for the Nieuw Ensemble’s Evening of Today 2018.

1. Communication with the author in 2022. No original source identified. ↩