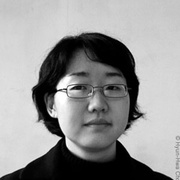 South Korean composer, organist, and pianist born in 1977 in Seoul.

Composer, organist, and pianist Hyun-hwa Cho was born in Seoul in 1977. She began playing piano at the age of five and by fifteen was performing in contemporary music venues across Seoul, participating in some twenty premieres. In parallel, she studied composition with Sukhi Kang at Seoul National University, graduating with a bachelors degree.

She entered the Conservatoire de Paris (CNSMDP) in 2003, studying orchestration with Michèle Reverdy, composition with Emmanuel Nunes and Stefano Gervasoni, and analysis with Michaël Levinas. She graduated with highest honors in orchestration with a unanimous jury and earned a masters in composition, along with the Prix CNSMD Paris for young composers from the Fondation Francis et Mica Salabert. She also studied electronic music with Luis Naón, Yann Geslin, and Tom Mays.

From 2005 to 2007, with the encouragement of Christian Mouyen, she perfected her organ playing with François-Henri Houbart at the Conservatoire à rayonnement régional de Rueil-Malmaison, receiving highest honors from a unanimous jury, an excellence prize, and an advanced diploma. She is an organist at the Church of the Annunciation in the 16th Arrondissement of Paris.

Hyun-Hwa Cho was selected to pursue a summer course at the Centre Acanthes (Random Range, 2007) as well as the session de composition residency at Royaumont (Harmonie du Soir, 2008). Her electronic compositions have garnered prizes in international competitions such as Bourges (2006) and Festival Futura in Brest (2007). In 2007, she completed an acousmonium course at the Conservatoire de Lyon (CNSML). From 2007 to 2009, she particpated in Cursus (the IRCAM’s composition and computer music course), during which she composed Scrap and Vox Humana, and in 2010 took part in the Darmstadt Summer Course. Her piece Nimbus premiered at the Klangspuren Schwaz festival in Austria (2012) and Der Zauberlehrling premiered in 2013 in a performance by the Seoul Philharmonic Orchestra. In 2014 and 2015, she was a guest composer with Ensemble TIMF in Seoul and the NeuverBand ensemble in Basel (Quintessence). In March 2017, Jardin d’Éden, an installation created in collaboration with the video artist Raphaël Thibault, was exhibited at the Pompidou Center as part of its “Imprimer le monde“ show.