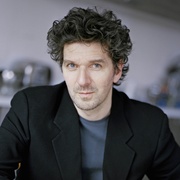 Born to deaf parents, Helmut Oehring initially worked in construction, and later in various other fields, before turning to composition. In 1985, he attended a concert of new music that affected him deeply. He became a passionate devotee of contemporary European music, and taught himself to play the guitar and to compose, receiving some guidance from Friedrich Goldmann, André Asriel, and Helmut Zapf. He subsequently studied composition with Georg Katzer from 1992 to 1994 at the Berlin Academy of Arts.

In 1994, he was awarded a study grant from the Cité des Arts in Paris, and the following year from Villa Massimo, the German Academy in Rome.

In 2008-09, he was composer-in-residence with the Brandenburgisches Staatsorchester Frankfurt, and in 2010 at the Kurt Weill Festival.

His autobiography Mit anderen Augen. Vom Kind gehörloser Eltern zum Komponisten [“With other eyes. From the child of deaf parents to composer”] was published in 2011.

Influenced by the environment in which he grew up and non-verbal communication with his parents, Oehring’s music is marked by its use of physical gestures derived from sign language; several of his works call for deaf/mute performers. Certain themes, such as the impossibility of verbal communication (as in Losheit for two contrabasses) or the death penalty (in pieces such as Lethal Injection, Leuchter and Cayabyab), are recurrent in his work. Very attached to dramatised forms of music, he has composed numerous operas.