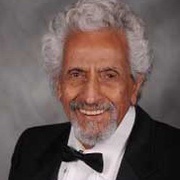 Halim El-Dabh was born into a family of music lovers in Cairo, where he learned to play the piano and the darbouka and began to write his own compositions. He studied agronomy at Cairo University, from which he graduated in 1945. He then began a career as an engineer, all the while pursuing his musical activities.

In 1942, El-Dabh won first prize in the composition and piano categories at the Egyptian Opera Music Competition. In 1944, the broadcasting of his piece Homage to Mohammed Ali-El-Kabir by the Egyptian Radio attracted the attention of the public and the royal family.

A pioneer of musique concrète, El-Dabh began his first sound experiments that same year at the Middle East Radio Station of Cairo, where he borrowed a magnetic tape recorder and recorded various sounds, including the traditional ritual chants of a Zaar ceremony, which he manipulated and transformed. He then produced one of the first known pieces of electronic music. The piece, entitled The Expression of Zaar, was presented in an art gallery in Cairo in 1944.

In 1946, he composed the soundtrack for Hussein Helmy’s film Azhar wa Ashwaq. In February 1949, he performed his piano composition It Is Dark and Damp on the Front at the All Saints Cathedral Music Center in Cairo.

El-Dabh obtained a scholarship to study music in the United States, arriving in the summer of 1950 as a Fulbright exchange student. He studied composition with John Donald Robb and Ernst Krenek at the University of New Mexico, with Francis Judd Cooke at the New England Conservatory of Music in Boston, with Aaron Copland and Luigi Dallapiccola at the Berkshire Music Center (now the Tanglewood Music Center) in Lenox, Massachusetts, and finally with Irving Fine at Brandeis University in Waltham, Massachusetts.

From 1969 to 2012, El-Dabh was Professor of African Music and Ethnomusicology at Kent University, in Kent, Ohio. He has also taught at Addis Ababa University in Addis Ababa, Ethiopia, the University of Kinshasa in Kinshasa, Zaire (now the Democratic Republic of Congo), and Howard University in Washington, DC. He was a consultant for the Folklife Program at the Smithsonian Institution in Washington, DC, from 1974 to 1981 for a project on Egyptian and Guinean puppetry.

His ethnomusicological research took him to Egypt, Ethiopia (where he formed Orchestra Ethiopia, the first pan-Ethiopian traditional instrument orchestra made up of musicians from various ethnic groups in that country), Congo, Guinea, Mali, Morocco, Niger, Nigeria, Senegal, South Africa, and Sudan. He also conducted research into the African diaspora in the United States.

In 1958, Fantasia-Tahmeel, a concerto for darbouka and string orchestra, was premiered by the American Symphony Orchestra under the direction of Leopold Stokowski and with the composer himself playing the darbouka.

El-Dabh worked closely with choreographer Martha Graham, composing music for four of her ballets: the opera-ballet Clytemnestra (1958), One More Gaudy Night (1961), A Look at Lightning (1962), and Lucifer (1975).

In the late 1950s and early 1960s, El-Dabh was invited to work at the Columbia-Princeton Electronic Music Center in New York, where he created a number of electronic works, including Leiyla and the Poet (1959). A recording of several of these works, entitled Crossing into the Electric Magnetic, was released in November 2001 by the Without Fear label.

His score for the sound and light show at the pyramids of Giza, composed in 1960 at the request of Gamal-Abdel Nasser and first performed in 1961, continues to be performed daily at the Great Pyramid.

El-Dabh’s later works include the ballet piece In the Valley of the Nile (1999), composed for the Cleo Parker Robinson Dance Company; the piano concerto Surrr-Rah (2000), composed for pianist Tuyen Tonnu; and Ogún (2000), for soprano and chamber ensemble. The musical theater piece Blue Sky Transmission: A Tibetan Book of the Dead premiered in September 2002 at the Cleveland Public Theatre in Cleveland, Ohio. Symphony for One Thousand Drums, a piece invoking the goddesses of ancient Egypt, was performed by a thousand percussionists in Cleveland (2006) and Fort Collins, Colorado (2008).