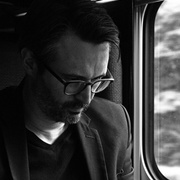 Born in France in 1976, Grégoire Lorieux began his studies in early music, in particular that of the Renaissance, (recorder with Denis Raisin-Dadre), and then transitioned to studying composition and electroacoustics with Philippe Leroux. He also participated in an orchestral conducting course with Nicolas Brochot. He earned a masters in musicology, writing his thesis on the work of the composer Kaija Saariaho.

He participated in the Royaumont composition workshop in 2001, and afterward was selected for a residency at the LIPM studio in Buenos Aires. He met Klaus Huber at the Centre Acanthes in 2003.

In 2012-13, he participated in SPEAP, an experimental program in arts and politics at Sciences-Po Paris, with scholars such as Bruno Latour and Antoine Hennion.

His musical work is extremely diverse, including composition, electroacoustic improvisations, “sound theater performances” (with the diffraction ensemble) theater and multimedia (the Le Fiacre company), computer music creation at IRCAM and with the Multilatérale ensemble. He participated in Emmanuelle Lizère’s Tigouli project for young children, composing an album and creating an interactive installation.

Since 2004, Lorieux has been a composer and computer music designer in charge of teaching at IRCAM. At the Pompidou Center, he presented two seasons of lecture-concerts with works premiered at IRCAM, titled “Une Heure, Une Oeuvre”. In IRCAM’s teaching program, he has focused in particular on learning activities for young audiences and teaching for the broader public, developing documentation for musical works and teaching tools, creating workshops for middle and high schoolers as well as workshops on mixed music: the Études Électriques project, for example, explores pedagogical methods for teaching mixed music to very young musicians.

Since 2013, he has been the co-artistic director of the L’Itinéraire, and since 2019 has been an associate professor of new applied technologies in the field of composing at the Conservatoire National Supérieur de Musique de Paris.

In 2009, he was awarded the SACEM Young Composers Prize.