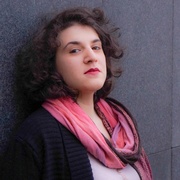 Giulia Lorusso was born in Italy in 1990. She studied piano and composition with Alessandro Solbiati at the Conservatorio di Milano, graduating in 2014. In 2015, she studied orchestration and analysis with Allain Gaussin and then participated in Cursus (IRCAM’s composition and computer music course). That same year, she enrolled in the masters program of the Conservatoire de Paris (CNSMDP), studying composition with Frédéric Durieux and electroacoustic composition with Yan Maresz and Luis Naón. She has taken part in numerous courses and master classes, including at the Darmstadt Summer Courses, Impuls Academy in Graz, and the Accademia Chigiana in Siena, with composers such as Salvatore Sciarrino, Stefano Gervasoni, and Pierluigi Billone.

Her music has been performed by the Quartetto Prometeo, Ensemble Nikel, the Divertimento Ensemble, Ex Novo, the Brussels Philharmonic Orchestra, and soloists from the Ensemble Intercontemporain. She has been featured at several festivals, including the Cinque Giornate festival in Milan in 2013, the Festival für junge Zeitgenössische Musik in Vienna in 2013, the Tzlil Meudcan Festival in Tel Aviv in 2015, the Tactus Forum for Young Composers in Brussels in 2015, and the Firenze Suona Contemporanea festival in Florence in 2014 and 2015.

Her first orchestral work, Esserepelle, premiered in a performance by the Brussels Philharmonic Orchestra in 2015; Con moto for accordion and electronics premiered in 2016 at the Pompidou Center as part of an IRCAM Cursus concert. The Spinola-Banna Foundation commissioned her Entr’ouvert, a piece for augmented piano that premiered in Turin and was performed again in June 2017 at IRCAM’s ManiFeste festival.

Lorusso is interested in the relationships between performer and instrument, body and sound, a perspective from which she seeks to integrate technology into her compositions.

Since 2019, she is in artistic research residency at Ircam, in collaboration with ZKM, where she works on generative sound environments. In 2020, she is also an artist in residence for the “Incubator” project at the Fondation Royaumont.