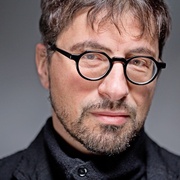 Italian composer and organist born in Pisa in 1973.

Francesco Filidei was born in Italy in 1973. He graduated with highest honors from a unanimous jury in organ and composition from the Conservatorio Luigi Cherubini in Florence. He then continued his studies with Salvatore Sciarrino, Sylvano Bussotti, Giacomo Manzoni, and Jean Guillou in Zurich. From 1999 to 2005, he studied composition at the Conservatoire national supérieur de Paris with Marco Stroppa and Frédéric Durieux and analysis with Michaël Lévinas. In parallel, he participated in Cursus (IRCAM’s composition and computer music course) from 2001-2002, where he studied with Philippe Leroux – as well as participating in the “Voix nouvelles” composition session at Royaumont in 2004.

He has performed as a soloist at the Berlin Philharmonic, the Festival d’Automne in Paris, the Festival Archipel in Geneva, the Venice Biennale, Milano Musica (La Scala’s 2008-2009 season), the IRCAM, the Vienna Theaterhaus, and the Forum Neues Musiktheater of Stuttgart, and elsewhere.

He was the Salzburg Music Förderpreisträger in 2006, and won the Takefu International Music Festival Prize in 2007, the Siemens Förderpreis in 2009, and UNESCO’s International Rostrom of Composers Picasso/Miro Medal in 2011.

Francesco Filidei was a composer-in-residence at the Schloss Solitude Academy in Stuttgart in 2006 and at the Casa de Velázquez in Madrid in 2007, for a period of two years. In 2010, he was appointed professor of compostition at Voix Nouvelles (Royaumont), and was a guest professor at the University of Iowa and the Takefu Academy in 2011. He held a residency at the Villa Medicis in Rome in 2012 and 2013 and was composer-in-residence with the 2e2m ensemble in 2015. In 2016, he was named Chevalier des Arts et Lettres by the French Ministry of Culture.

Francesco Filidei joined the Foundation of the Theatres of the Emilia Region in Italy as a musical consultant in 2018 and the Villa Medici in Rome as artistic director of the contemporary music festival Controtempo.

In 2019, he composed the opera L’inondation in collaboration with Joël Pommerat, a commission of the Opéra comique. In 2021, he adapted The Mask of the Red Death on commission from Ircam, for the 100th anniversary of the Donaueschinger Musiktage.

His works are published by Rai Trade and, since 2018, by Ricordi.