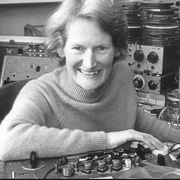 Daphne Oram is a key figure in British experimental electronic music. A co-founder of the BBC Radiophonic Workshop, she is a veritable pioneer of sound synthesis.

Born in 1925, Daphne Oram studied piano, organ, and composition at Sherborne School for Girls in Dorset. In 1943, she started working at the BBC, where she gained knowledge about acoustics and sound engineering, and continued to evolve creatively. While there, she also became familiar with the concepts and technology that would later influence her compositions, most notably, the work of Pierre Schaeffer at the Radiodiffusion-Télévision Française, as well as the research being carried out in the various electronic music studios which were opening throughout Europe, such as the Westdeutscher Rundfunk in Cologne and the Studio di Fonologia in Milan.

During this period, she became aware of recent developments in the field of synthesis, and began to experiment with oscillators. She also undertook experiments with tape splicing and montage in the composition of “radio fiction” works which were broadcast live. In 1958, she co-founded the BBC Radiophonic Workshop with Desmond Briscoe.

Daphne Oram left the BBC in 1959, establishing her own studio in Tower Folly, a former guest-house in Fairseat (Kent), where she composed numerous works of electronic music for theatre, cinema, and television, mostly for commercials and documentaries. Her works were also performed publicly: Four Aspects (1960) was played at Queen Elizabeth Hall in 1968, Pulse Persephone (1965) was included in the “Treasure of the Commonwealth” exhibition at the Royal Academy of Arts, and Episode Metallic (1965) was used in a kinetic sculpture installation by Andrew Bobrowski.

In 1957, Daphne Oram invented a novel system of synthesis, “Oramics,” in which lines drawn on 35mm film are read by photovoltaic cells and converted into signals which control the pitch, timbre, and amplitude of the resulting sounds. The first piece composed entirely using this system was Contrasts Esconic (1963).

In 1972, she published An Individual Note - Of Music, Sound and Electronics, in which she discusses the physics of sound and the evolution of electronic music.

Daphne Oram died in 2003 at the age of 77. Her archives are conserved at the Goldsmiths University Library in London.