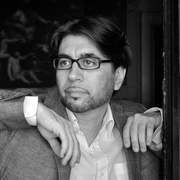 Italian composer born in Rome in 1974.

Daniele Bravi was born in Italy in 1974 and began studying piano at the age of six. A self-taught composer from a young age, he entered the Conservatorio di Santa Cecilia in Rome, graduating with honors in 2003. The Association de Repentigny pour l’Avancement de la Musique (Aramusique) awarded him the Marcello Intendente prize for best diploma of the academic year. Bravi continued his studies in France at the Conservatoire National de Région de Strasbourg, from which he graduated in 2006, studying composition with Ivan Fedele, Salvatore Sciarrino, Pascal Dusapin, Wolgang Rihm, Yan Maresz, and Helmut Lachenmann.

From 2006 to 2008, he participated in Cursus (the IRCAM’s composition and computer music course), where he specialized in computer-assisted composition and live electronics.

Bravi draws inspiration from philosophy, architecture, psychology, and above all physics, as may be heard in works such as La curva di Lìgaso (2004) or Rifrazioni Lontane for orchestra (which won the Musica Europa Composition Competition Prize in 2004). Meditazione Prima in Eco - Hommage à Descartes (2002) for ensemble was selected by the Comitato Nazionale Italiano Musica (CIDIM) and the International Association of Music Centres (IAMIC) to represent Italian composers at the 2008 IAMIC conference in Wellington, New Zealand.

Initially influenced by the work of Charles Ives, he expanded his studies of the spatialization of sound and timbral research through his ongoing interactions with performers such as Irvine Arditti, Rohan de Saram, Mario Caroli, Roberta Gottardi, and Keiko Murakami. This exploration of sound, Bravi notes, “is part of a clear formal context, characterized by an economy of material and a continuous reference to musical fragments, paying particular attention to the “musical perception” of the listener.”

Bravi’s compositions have been played at many Italian festivals, including the Venice Biennale (2010 and 2015), Suona Francese, Musica Europa 2004, Nuovi Spazi Musicali, Controcanto, Nuova Consonanza in Rome, Rondò in Milan, and MICO in Bologne, as well as in festivals throughout Europe, including the Musica Festival in Strasbourg, the Archipel Festival in Geneva, the Stockholm New Music Festival, Acanthes 2005 in Metz, Zilele Muzich Contemporané in Bacäu (Romania), and A Tempo à Podgorica in Montenegro. His pieces have also been performed at the Bargemusic festival and the International Keyboard Institute & Festival in New York in 2014.

For the 10th annual Pietro Squartini piano competition in Perugia (1998), three of his compositions Quattro variazioni for piano and Acquerelli for piano four hands were selected as required pieces.