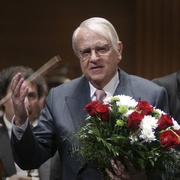 At the outbreak of the Spanish civil in 1936, Cristóbal Halffter and his family emigrated to Velbert in Germany, where they remained until 1939 ;. It was upon their return to Madrid in 1942 that Cristóbal, the nephew of composers Rodolfo (1900-1987) and Ernesto (1905-1989) Halffter Escriche commenced his music studies via private instruction. In 1947, he enrolled in the city’s conservatoire under the tutelage of the composition professor Conrado del Campo (1878-1953). In 1951, alongside an Advanced Degree in Composition, he was awarded an Outstanding Distinction in the field for his Scherzo orchestral and the creation, that December, of his Sonata para piano. Nevertheless, it was the June 1952 premiere of his Antífona pascual a la Virgen ‘Regina cœli’ that truly marked Halffter’s professional debut. It was strengthened in 1953 when he obtained the National Music Prize (an honour he once again received in 1989) for his Concierto para piano y orquesta. Halffter then became an active contributor to Radio Nacional de España’s classical music programmes and launched his career as an international orchestral conductor over the course of which he directed the Manuel de Falla Orchestra (from 1955 to 1963), and was the acting overseer of the Orquesta de Radiotelevisión Española from 1965 until he retired in 2010.

Following the staging of his ballet Jugando al toro in the United Kingdom, and via his connection to Alexander Tansman, alongside whom the composer pursued specialised studies from 1959 to 1961, Halffter was introduced to Universal Editions who became the sole publishers of his work ;. This contract secured the composer’s expanding international activity, as did the inclusion of his work [Formantes (Móvil para dos pianos)] at the International Society for Contemporary Music (ISCM) Festival in London in 1962. Within the following year, his pieces were also referenced at two of the most prominent contemporary music forums of the time: the Internationale Ferienkurse für Neue Musik in Darmstadt (Formantes again) and the commissioning by Donaueschinger Musiktage of Sinfonía para tres grupos instrumentales. In 1962, Halffter was appointed Professor of Composition and Musical Forms at the Madrid Conservatoire, where he was simultaneously director from 1964 to 1966 until his resignation. Halffter’s academic career continued as Chair of the Music Department at the University of Navarre (1969-1978), Chair of Composition at the Musikhochschule de Berne (1987-1989). He was also a professor at the Internationale Ferienkurse für Neue Musik in Darmstadt (1976 et 1978), creative consultant to the Department of Electronic Music at Heinrich-Strobel-Stiftung from 1979 to 1982, and he presided over the Spanish section of the ISCM from 1976 to 1978.

Cristóbal Halffter is the only Spanish composer whose collected publications are held at the Paul Sacher Stiftung in Basel. Among the distinctions conferred upon him are the Chevalier de l’Ordre des Arts et des Lettres (1968) – Commandeur en 1986 –, Académicien des Beaux-Arts de l’Espagne (1983) and member of l’Akademie der Künste de Berlin (1985) ;. He received the Montaigne-Preis from the Alfred Toepfer Stiftung F.V.S. Hamburg (1994), the BBVA Foundation Frontiers of Knowledge Award in Contemporary Music (2009) and the Kulturpreis der Stadt Kiel (2014). Halffter authored

Cristóbal Halffter’s early studies in composition were clearly influenced by the neoclassicism of his uncles Ernesto Halffter and Rodolfo Halffter Escriche (as shown in Christóbal’s Sonata para piano, 1951) and by the late style of Manuel de Falla (as in Antífona pascual a la Virgen ‘Regina cœli’, 1952). Shortly after completing his studies in composition, Halffter received his first Premio Nacional de Música for his Concierto para piano y orquesta (1953). This inspired piece ushered in a transition period strongly steeped in the work of Béla Bartók and of Igor Stravinsky, whom he met personally in Madrid in March 1955. This transition period stretched until 1956 and the composition of Dos movimientos para timbal y cuerdas.

Incisive rhythms, neoclassic formalist underpinnings, and a broader approach to tonality characterize this period, in which Halffter began to experiment with the limits of tonality. His writings from this time also contain his forays into dodecaphony (see Tres piezas para cuarteto de cuerda, 1955), which he discovered via the recordings, books, and scores in his uncle’s private collection. His first trips abroad, to Paris in 1954 and 1956 and to Italy in 1957, brought him into direct contact with the innovations of composers such as Luciano Berio, Pierre Boulez, John Cage, Henri Pousseur, and Karlheinz Stockhausen. These trips also introduced him to Pierre Henry’s musique concrète.

By the end of 1957, Halffter and other young composers including Luis de Pablo and Ramón Barce formed the Nueva Música group, which, with the support of the Ateneo de Madrid, pursued the avant-garde techniques then shared on the international scene. Halffter deployed dodecaphony in Sonata para violín solo (1959), integral serialism in 5 microformas para orquesta (1960), macrostructural improvisation techniques in Formantes (Móvil para dos pianos) (1961), and sound spatialization in Sinfonía para tres grupos instrumentales (1963). His Espejos (1963) is the first known example of electroacoustic music in Spanish composition. In this period and through the end of the 1960s, Halffter also produced numerous scores for films and plays. These scores were more stylistically conservative than his other works (e.g., La Orestíada, 1959; and La cornada, 1960), though some included more daring aesthetic elements (e.g., La paz comienza nunca, 1960; El extraño viaje, 1964; 10:30 PM Summer, 1964).

Halffter’s recognition grew in the 1960s, during which time he became a prominent figure in Spain’s avant-garde composition and music scene. His work was commissioned and performed in many of the top festivals, including Semana de Música Religiosa de Cuenca (1962), El Festival de Música de America y España (1964), and the Bienal de Música Contemporánea in Madrid (1964). In the following years, Halffter strengthened his international notoriety by traveling regularly. In 1966, the Electroacoustic Music Laboratory in Utrecht provided him with the technical means for Líneas y puntos, which was performed the same year at the Donaueschingen Festival in Berlin and in Buenos Aires in 1967. In February 1968, at the peak of this intensely active stretch, the United Nations commissioned his cantata Yes, Speak Out, Yes, to commemorate the twentieth anniversary of the Universal Declaration of Human Rights.

Yes, Speak Out, Yes is a prime example of Halffter’s foundational musical language. It incorporates imposing orchestral colors (see also Secuencias, 1964), formal rigor tempered by aleatory processes (Antiphonismoi, 1967; Anillos, 1968), and eloquent expressivity rooted in textures that are extremely different in dynamics and timbre (Symposion, 1964-1966). With these features, his music orbits the sonorism of the 1960s, as exemplified by György Ligeti and Krzysztof Penderecki, as well as Witold Lutosławski with his controlled aleatoricism.

Starting in 1968, Halffter’s focus shifted from style to social concerns. These considerations manifested in two ways. First, Halffter showed his interests in Spanish mysticism, which appears in his Noche pasiva del sentido (1970) inspired by Jean de la Croix, and ecumenism, as shown in Officium defunctorum (1979). Second, Halffter became concerned with the place of the creator in contemporary society and its political ramifications. He integrated the latter into his compositions both abstractly (Planto por las víctimas de la violencia, 1971; Variaciones sobre la resonancia de un grito, 1977) and more concretely with explicit references to problems from the final years of Francisco Franco’s dictatorship. Themes treated in his compositions include the paucity of public liberties (Requiem por la libertad imaginada, 1971), the loss of religious freedom (Gaudium et spes, 1973), and wounds left unhealed from the Spanish Civil War (Elegías a la muerte de tres poetas españoles, 1975). These and other works, particularly of the concertante genre (Tiempo para espacios from 1974, for harpsichord and string ensemble, and Concierto para violín y orquesta from 1979), bear witness to the composer’s maturity.

In the subsequent period, Halffter began to explore Spanish literary and music traditions from the Middle Ages through the eighteenth century. The new aesthetic was inaugurated with the choral piece Jarchas de dolor de ausencia (1979), which is based on medieval Jewish Spanish poetry. Halffter expresses his interest in this cultural heritage in several of his works, through music, texts, and musical form (Tiento, 1981). Other references include a Juan del Encina romance in Versus for orchestra (1983), the music of Antonio de Cabezón and Juan Cabanilles in the frequently performed Tiento del primer tono y batalla imperial (1986), and Mozarabic texts and songs in Canciones de Al Andalus (1988), which later became part of Siete cantos de España (1992). Yet another is the rhythmic and melodic structure of a fandango by Antonio Soler in Fandango para ocho violoncelos (1989), as arranged for choir and orchestra in Preludio para Madrid ’92 (1991). Only on occasion, Halffter draws elements from a broader European tradition. For example, the Quatuor à cordes n. 2 (Mémoires 1970) cites three excerpts from Beethoven’s Op. 135.

During the 1990s Halffter contributed to the orchestral repertoire with Mural sonante: Homage to Antonio Tàpies (1994) and Odradek: Homage to Franz Kafka (1996) and to chamber music with the string sextet Endechas para una reina de España (1994) and Espacios no simultáneos for two pianos (1997). Nonetheless, the events of this period are overshadowed by the appearance of his first opera Don Quijote, composed from 1996 to 1999, and first performed in 2000. The complexity and scope of Don Quijote synthesizes Halffter’s musical techniques with his poetic focus. Halffter fleshes out Miguel de Cervantes’s novel with literary references drawn from other periods in Spanish history. In doing so, he elevates the figure of Don Quijote and Cervantes’ work into a symbol that transcends time and culture.

From Don Quijote to his most recent work (Canciones, 2020-2021), Halffter continues to explore the aforementioned directions. On one hand, he has renewed the Spanish musical and cultural tradition within Europe with such works as Halfbéniz (2000), which based upon Isaac Albéniz’s music, and Imágenes para orquesta (2014), which establishes a parallel between Ludwig van Beethoven (as Halffter quotes from the op. 18-1, op. 131, and op. 132 quartets) and Francisco de Goya (who inspires the names of both movements). On the other hand, Halffter reflects on the evolution of contemporary society and on the need for an individual ethical consciousness in the face of its contradictions (Adagio en forma de rondó, 2002; Attendite, 2003; De ecos y sombras, 2008-2009; and Ritual, 2009).