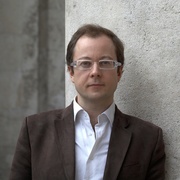 French composer born in 1970 in Boulogne-Billancourt.

In 1998, he was awarded the Prix Cardin by the Institut de France for Supernova, and in 1999 he won the Prix Nadia et Lili Boulanger. In 2000, he won the SACEM’s Young Composer Prize, and in 2001 was awarded a fellowship from the Fondation Natexis. In 2006, he won the Grand prix lycéen des compositeurs. In 2011, the SACEM awarded him its Grand Prix for lifetime achievement.