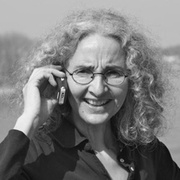 Carola Bauckholt was born in Germany in 1959. She worked as a director at the Theater am Marienplatz in Krefeld and studied composition at the Musikhochschule Köln with Mauricio Kagel from 1978 to 1984. In 1985, she created the music publishing house Thürmchen Verlag with Caspar Johannes Walter. In 1991, they went on to found the Thürmchen Ensemble for the performance of experimental music.

Since 2010, she has been a regularly invited professor at numerous universities across Europe and in South America.

She has received many honors, including the Bernd Alois Zimmermann Scholarship from the city of Cologne (1986), the Carl Maria von Weber Prize (Dresden, 1992/93), was named Artist of the Year by the State of North Rhine Westphalia in 1998, and won the GEMA Deutsche Musikautorenpreis in 2010 in the experimental music category.

A central theme in Carola Bauckholt’s music is “the examination of the phenomena of perception and understanding. Her compositions often blur the boundaries between visual arts, musical theater and concert music. She is especially fond of using noisy sounds, which are often produced by unconventional means (such as extended instrumental techniques or bringing everyday objects into the concert hall) (https://www.carolabauckholt.de/bio.html)."

Her work is published by Thürmchen Verlag.