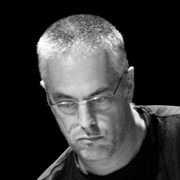 Richard Barrett was born in Swansea, Wales, in 1959. He studied genetics at University College, London, from 1977 to 1980, before turning to composition, which he studied with Peter Wiegold and Hans-Joachim Hespos from 1980 to 1983. In 1984, he took a course with Brian Ferneyhough at Darmstadt, where he won the Kranichsteiner Musikpreis in 1986. He won first prize in the Gaudeamus awards in 1989 for his string quartet I open and close and the Chamber Music category of the British Composer Awards in 2003 for another string quartet, 13 Self-portraits. He was a guest of DAAD’s Berliner Künstlerprogramm in 2001-2002.

He taught composition at Middlesex University from 1989 to 1992, electroacoustics and electronic composition at the Institute of Sonology of the Hague Royal Conservatory from 1996 to 2001, where he returned in 2009. Between 2006 and 2009, he was a professor of composition at Brunel University in London.

His name is associated both with the New Complexity group of British composers and with free improvisation, which he often practices with Paul Obermayer, with whom he founded the electronic music duo FURT in 1986, and the electroacoustic octet fORCH in 2005. He also has worked with artists such as Ute Wasserman (since 1999) in a vocal-electronics duo, and with the Evan Parker Electro-Acoustic Ensemble (since 2003). Most of his pieces involve live electronics, which the composer creates and performs himself. The codex series, which he began in 2001 and which comprised eleven pieces in 2010, leaves room for a great deal of improvisation both from the performers and from the composer using live electronics in performance.

Many of his works are written in large cycles and draw on literary sources for inspiration – Samuel Beckett in Fictions (1986-1996), Paul Celan in the Opening of the Mouth cycle (1992-1997) – or on the visual arts – Roberto Matta for the After Matta cycle (1985-1990) –, as well as on sciences, mythology, philosophy, or politics. Since 2003, he has been working on an eight-part cycle titled No, resistance & vision, which includes CONSTRUCTION, which is itself a conglomerate work made up of many interwoven components. The total duration of resistance & vision is over six hours.

More recent works include a commission from the London Sinfonietta titled Mesopotamia (2009), another from the Radio Bayerischen Rundfunk titled IF resistance & vision part 6 (2005-2010), and several peices from the eighth part of that cycle, including Kassandra and Hekabe-alpha (2005-2011) for voice and ensemble with texts from Euripides’ Trojan Women.