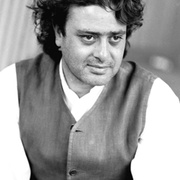 Born in Buenos Aires in 1958, Martin Matalon studied at the Juilliard School in New York, graduating with a Master’s degree in composition. In 1986, he received the Charles Ives Prize from the American Academy of Arts and Letters, and in 1988 a Holtkamp AGO Award and numerous composition awards from ASCAP and BMI. In the Summers of 1987 and 1988, he attended classes with Olivier Messiaen and Pierre Boulez at Centre Acanthes (then in Villeneuve-lès-Avignon). A Fulbright scholarship allowed him to undertake further study in France with Tristan Murail in 1988-89.

In 1989, he founded “Music Mobile,” an ensemble based in New York dedicated to contemporary repertoire. He served as the group’s director until 1996.

In 1993, Matalon settled in Paris. The composition of La Rosa profunda for an exhibition at the Pompidou Centre of works related to Jorge-Luis Borges marked the beginning of a long period of collaboration with IRCAM. The same institution subsequently commissioned him to compose a soundtrack for a newly-restored version of Fritz Lang’s Metropolis. Following the completion of this large-scale piece, Matalon turned his attention to the work of Luis Buñuel, composing soundtracks for three surrealist films by the Spanish director: Las siete vidas de un gato in 1996 for Un Chien Andalou (1927), the orchestrated version of which became El torito catalan (2001); Le scorpion in 2001 for L’Âge d’or (1931); and Traces II (la cabra) (2005) for Land Without Bread (1932).

Two series of works make up a significant part of Matalon’s catalogue: Trames (started in 1997), a collection of pieces skirting the boundary between concertos and chamber music; and Traces, a set of works for solo instruments with real-time electronics, which represents a sort of “compositional diary” for the composer. Additionally, he has composed extensively for chamber ensemble, with notable works including Formas de arena for flute, viola, and harp, and Lineas de agua for cello octet.

In 2005, Matalon received both the J.S Guggenheim Foundation Award (New York) and the Institute of France/Academy of Fine Arts Prize. In 2001, he was awarded the City of Barcelona Prize for his score for Metropolis. Finally, in 1989, he received the “Opéra Autrement” Prize from Centre Acanthes for the commission and production of the chamber opera The Secret Miracle, based on Jorge-Luis Borges’ short story of the same name.

During a residency at the Metz Arsenal in 2003-04, three of his symphonic works were recorded by the Orchestre National de Lorraine, conducted by Jacques Mercier, and subsequently released on CD in 2006 on the Universal label. He was in residence at Muse en Circuit from 2005 to 2010, during which Sillages Ensemble premiered the complete Traces cycle, a recording of which was released by Sismal Records in 2010. He was composer-in-residence at the Stavanger Festival (Norway) in 2011, and guest composer at the Les Arcs Festival in 2014.

He has taught composition at the Aubervilliers-La Courneuve Conservatory (in the northern suburbs of Paris) since 2010, and at the Lyon Conservatory (CNSM) since 2017. He has also served as a guest professor at McGill University (2004-08), IRCAM, Centre Acanthes, Domaine Forget with Nouvel Ensemble Modern (2009), and numerous other summer academies, including CompoLab, Injuve, and the Institut français-Barcelona.

His opera L’Ombre de Venceslao was nominated for the Victoires de la Musique (French Ministry of Culture Awards recognising outstanding achievements in the music industry) in 2017.