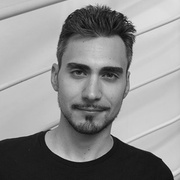 Emmanuel Palumbo studied information technology at Bari University before undertaking study of composition at the Milan Conservatory with Gabriele Manca. In 2012 and 2013, he studied composition with Gérard Pesson and electroacoustic music with Yan Maresz at the Paris Conservatoire (CNSMDP). From 2014 to 2016, he participated in the two years of the IRCAM Cursus (IRCAM’s composition and computer music course). He also attended numerous masterclasses, allowing him further study with composers such as Franck Bedrossian, Pierluigi Billone, Frédéric Durieux, Francesco Filidei, Stefano Gervasoni, Hèctor Parra, and Alessandro Solbiati.

In 2016, he participated in Voix Nouvelles at Royaumont. In 2018, he undertook an artistic research residency at IRCAM, during which he participated in a project examining interactions which could serve as the basis for the creation of a musical language incorporating physiological parameters, perception, and emotional responses. This gave rise to the creation of a work for an instrumentalist and a second performer embodying the “emotional resonance” of the musical material.

Palumbo’s works have been performed by ensembles such as Ensemble Multilatérale, Alternance, Divertimento, MDI, Interface, and Talea, and soloists such as Maria Grazie Bellocchio, Christophe Mathias, Joséphine Besançon, and Domenico Melchiorre. He has participated in festivals including ManiFeste, Voix Nouvelles, Festival Pontino, Rondò, and San Fedele Musica.