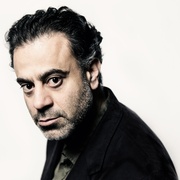 The son of Palestinian parents, Samir Odeh-Tamimi grew up in a village near Tel Aviv. As a child, he was fascinated with the sonorities of the drums and tambourines that were indigenous to his country of birth. Drawn to music from an early age, he studied recorder with an Israeli school teacher, and taught himself to play the electric organ. From 1984 to 1989, he performed with various popular and traditional Arab music groups with whom he toured the country. During the same period, contact with European contemporary music through radio broadcasts led him to turn to composition.

From 1992 to 1996, following a period of two years spent in Greece, he studied musicology at Kiel University (Germany). He subsequently met Korean composer Younghi Pagh-Paan, with whom he studied composition at the Bremen Hochschule für Künste; Pagh-Paan encouraged him to explore and develop his cultural heritage in his music. He also received guidance from Klaus Huber, and studied analysis with Günter Steinke.

In 2003, he was awarded first prize in the Elisabeth Schneider Foundation Composition Competition. In 2007, he was a resident at Casa Baldi in Rome. The following year, he was invited to Istanbul to participate in the “Into” project (organised by Ensemble Modern and the Siemens Arts Program) for which he composed Cihangir. In 2010, his works Leila und Madschnun and Hinter der Mauer were premiered in Germany, with the latter piece as part of the celebrations marking the 20th anniversary of the reunification of Germany. In 2011, a monographic CD of his works was released on the Wergo label (Zeitgenössische Musik series), with support from Deutscher Musikrat. In 2014, Mansúr was premiered at the Salzburg Festival by the choir and members of the Bavarian Radio Symphony Orchestra.

His works often call for combinations of traditional Middle Eastern instruments, notably drums, and Western orchestral instruments. He uses electronics only on rare occasions. The titles of his works, as well as the texts which he sets to music, often make reference to historical and/or political events, including conflicts in the Middle East and the Holocaust.