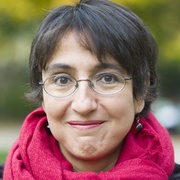 Spanish composer born in 1973 in Seville.

Elena Mendoza studied German linguistics in Seville. She then studied piano and composition in Zaragoza with Teresa Catalán, in Augsburg with John Van Buren, in Düsseldorf with Manfred Trojahn, and in Berlin at the Hochschule für Musik Hanns Eisler, with Hanspeter Kyburz. Since her studies, she has received numerous scholarships from different institutions, such as the Internationale Ensemble Modern Akademie in Frankfurt am Main, among others.

Mendoza is particularly interested in questions of timbre and dramaturgy, as well as in theatrical concepts of language, space, and music. The music theater pieces Niebla (2009), La Ciudad de las Mentiras (2011-2014), and Der Fall Babel (2017-2019) written in close collaboration with director Matthias Rebstock, set new standards in music theater: music and acting react to each other like parts of a machine in continuous fluid motion.

Mendoza’s work is also influenced by philosophy, especially by the Spanish humanismo movement, which considers humans as complex individuals with both rational and irrational behaviors and thoughts.

Most of her works are chamber music pieces, but she also composes for orchestra. Electronics are usually reserved for her musical theater pieces. She also integrates everyday objects into some of her compositions. Her pieces are generally short, and the longer works are usually divided into short movements.

She lives in Berlin, where she teaches composition at the Universität der Künste. She is artist-in-residence at the Valencia Orchestra.

Her scores have been published by Edition Peters since 2009.