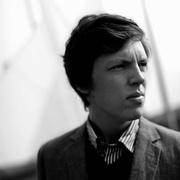 Rune Glerup was born in Denmark in 1981. He studied composition and electroacoustics at the Royal Danish Academy of Music with Niels Rosing-Schow, Bent Sørensen, and Hans Peter Stubbe Teglbjaerg, as well as with Walter Zimmermann in Berlin. When he completed his studies in 2010, the London Sinfonietta devoted a concert to his work.

From 2010 to 2012, he participated in Cursus I and II (IRCAM’s composition and computer music course) as well as in master classes with Philippe Leroux, Philippe Manoury, Hanspeter Kyburz, Denis Smalley, Ivan Fedele, Rolf Wallin, and Adriana Hölszky.

He has received numerous awards and honors, including a fellowship from the Danish Arts Foundation. His music has been performed by ensembles such as the London Sinfonietta, Ensemble Alternance, TM+, Athelas Sinfonietta Copenhagen, Contemporánea, the Ensemble intercontemporain, and the SWR Radio-Sinfonieorchester Stuttgart. His compositions have also been featured at European festivals such as the Printemps des Arts de Monte-Carlo, the Venice Biennale, IRCAM’s ManiFeste, Nordic Music Days, Young Nordic Music, and Pulsar.

Rune Glerup studied conducting with Pierre-André Valade in Paris and in 2009 was named head of the Danish ensemble Contemporána, which specializes in the performance of mixed music. From 2012 to 2014, he served as co-artistic director of the Athelas Sinfonietta in Copenhagen. From 2012 to 2016, he served as the artistic director of the Klang-Copenhagen Avantgarde Music Festival.