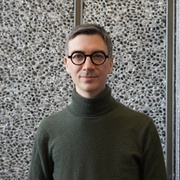 Italian composer born in Bologna in 1979.

Andrea Sarto studied composition and electronic music with Gian Paolo Luppi, Paolo Aralla, and Lelio Camilleri at the Martini Conservatory in Bologna. He went on to study composition with Ivan Fedele at the Santa Cecilia Academy in Rome, and was invited to attend classes at the Kungliga Musikhögskolan in Stockholm as a guest student. In 2009, he participated in the first year of the IRCAM Cursus (IRCAM’s composition and computer music course).

He participated in the Malmö Orchestral Workshop, Sweden (2006), Centre Acanthes in Metz (2006 and 2009), Stresa EAR-Lab with Luca Francesconi (2006), and Royaumont Voix Nouvelles with Brian Ferneyhough (2008). He also collaborated with the recorder and cello classes of Antonio Politano (HEMU Lausanne) and Francesco Dillon (Fiesole Academy of Music), respectively. In 2010, he was guest composer-in-residence at Royaumont for the Transforme Project, in which composers of electronic music collaborated with dancers/choreographers. In 2011-12, he participated in the second year of the IRCAM Cursus; this saw the composition of a work for choir and electronics which was premiered at ManiFeste in July 2012.

Andrea Sarto was a finalist in the International Gaudeamus Composer Competition in 2007 and 2009, the Barzio Fourth National Competition for Young Composers in 2001, and the Bologna Iceberg Competition in 2007. Several of his works have been broadcast on RAI Radio 3 and published online by the Miraloop independent label.

He currently teaches ear training at the Beauvais Conservatory (France).