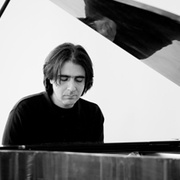 Alexandros Markeas studied piano, chamber music, and theory at the Athens Conservatory. Starting in 1987, he undertook further study with Alain Planès (piano), and, from 1992, composition studies with Guy Reibel, Michaël Levinas, Laurent Cuniot, and Luis Naon, at the Paris Conservatoire (CNSMDP), graduating with highest honours in piano, counterpoint, and composition. In 1997-98, he participated in the IRCAM Cursus (IRCAM’s composition and computer music course), during which his work Penser/Classer was premiered. In 1998, he attended the first European Music Academy of the Aix-en-Provence International Festival, where he composed music for the ballet Rondo notturno (jardin secret). From 1999 to 2001, he was a resident at Villa Medici, and from 2005 to 2007, was in residence with Musiques Inventives in Annecy, in association with the Savoie Conservatory. A string of other artistic residencies followed: Quartz (Brest National Theatre) in 2008, Évreux National Theatre in 2011, Metz Arsenal/Orchestre Nationale de Lorraine from 2014 to 2016, Rencontres Départementales de Musique de Chambre d’Ivry-sur-Seine in 2016-17, Les Détours de Babel Festival in Grenoble in 2017, Rueil-Malmaison Conservatory (in the suburbs of Paris) in 2018, and the Monaco Spring Arts Festival in 2019.

Always endeavouring to enrich his work through contact with other artforms (text, theatre, visual arts, architecture), he has composed a number of scenic works, including Remarques sur les couleurs (1997), Narcisse (2006), and Trois voyages (2010), as well as music for video installation: Symphonie diagonale (2008). He also creates works involving improvisation, and draws upon Greek traditional musics, as in Taximi (2003), as well as those of other cultures. His catalogue also includes a number of pedagogical pieces, including Les oiseaux (2000), La querelle des muses (2002), and Le retour du loup (2010-11).

In June 2021, his work Music of Choices was premiered at the Pompidou Centre as part of ManiFeste.