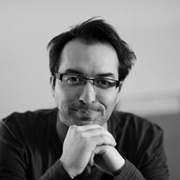 Yann Robin first undertook study of music in Aix-en-Provence. He later studied jazz, as well as composition with Georges Bœuf, at the Marseille Conservatory. He went on to study theory and counterpoint at the Paris Regional Conservatory and musicology at the Sorbonne. He subsequently studied composition with Frédéric Durieux and analysis with Michaël Lévinas at the Paris Conservatoire (CNSMDP), graduating with highest honours. In 2004, he attended composition classes with Jonathan Harvey at Centre Acanthes, and the following year participated in Voix Nouvelles at Royaumont. In 2006, he was selected to participate in the fourth edition of the Ensemble Aleph Forum. In the same year, he received a grant from the Meyer Foundation. From 2006 to 2008, he undertook the two years of the IRCAM Cursus (IRCAM’s composition and computer music course). In 2008, he was awarded a prize from the Salabert Foundation and a grant from the French Academy of Fine Arts.

In 2005, he co-founded Ensemble Multilatérale and has since served as the group’s artistic director. In 2008-2009, he undertook a composition/research residency at IRCAM during which he contributed, alongside Gérard Assayag and Arshia Cont, to the development of the Omax software. In 2009-10, he was a resident at Villa Medici. While there, he inaugurated the “Controtempo” festival of contemporary music. In 2011, he was awarded the SACEM Grand Prix for symphonic music.

Yann Robin’s music has been performed in France and abroad in festivals including Agora, Lucerne, Musica, Donaueschingen, Manca, Archipel, Présences, Gaudeamus, and the Venice Biennale.

In 2003, he received his first commission from the French Ministry for Culture, and was awarded first prize in the Frédéric Mompou International Composition Competition in Barcelona. In 2004, Ensemble Intercontemporain premiered his quartet, Phigures. In 2005, during a residency at La Muse en Circuit, he composed Chaostika for percussion and electronics. His work Polycosm, for five folk instruments and orchestra, was composed for the 60th anniversary of the founding of UNESCO. A commission from ARCAL gave rise to his first theatrical work, Ni l’un ni l’autre, inspired by Goethe’s novel Wilhelm Meister’s Apprenticeship.

A commission from the French Ministry for Culture for the Ensemble Orchestral Contemporain resulted in Art of Metal, a concerto for metal contrabass clarinet and ensemble. This work became the first in a three-part cycle for the instrument (composed in close collaboration with clarinetist Alain Billard), comprising also Art of Metal II for metal contrabass clarinet and electronics, and Art of metal III for metal contrabass clarinet, ensemble, and electronics, premiered at the Agora Festival in 2008 by Ensemble Intercontemporain, conducted by Susanna Mälkki. Also in 2008, he composed Titans for twelve percussionists, a commission from the Lucerne Festival, and Countdown for chamber ensemble, commissioned by Radio France and premiered at Festival Présences.

From 2006 to 2008, Robin was composer-in-residence with the Lille National Orchestra, for whom he composed two works. 2010 saw the premiere of Vulcano by Ensemble Intercontemporain, and Scratches for string quartet and electronics, a commission of GMEM and the Diotima Quartet. His second string quartet, Crescent Scratches, was premiered at the Aix-en-Provence Festival in 2011. Inferno, a work based on the cartography of Dante’s Inferno, co-commissioned by IRCAM and the Radio France Philharmonic Orchestra, was premiered in June 2012 at the ManiFeste Festival. In the same year, Backdraft was commissioned by the New York Philharmonic and the Casa Da Musica in Porto. In 2015, the Seattle Symphony Orchestra, conducted by Ludovic Morlot, premiered Ashes. In 2015, Strasbourg Musica commissioned two works, Arkham and Unza Danza. His third string quartet, Shadows, was premiered in 2016 by the Tana Quartet. In 2020, Ircam commissioned him to write a concerto for double bass, ensemble, and electronics, Triades, which premiered at the Philharmonie de Paris by the Ensemble Intercontemporain.