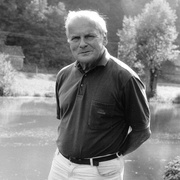 Vinko Globokar was born in 1934 in Anderny (France) to Slovenian parents. From the age of thirteen to the age of twenty-one, he lived in Ljubjana, Slovenia (then Yugoslavia), where he began his musical career as a jazz trombonist. He returned to France on a scholarship in 1955, where he studied at the Conservatoire de Paris (CNSMDP). He spent time in Cologne and Berlin before settling in Paris and Žužemberk (Slovénia). He studied composition and orchestra conducting with René Leibowitz and later with Luciano Berio.

As a trombonist, he inspired a great deal of contemporary writing for trombone, by composers including Luciano Berio, Mauricio Kagel, Karlheinz Stockhausen, René Leibowitz, and Toru Takemitsu.

From 1967 to 1973, he taught at the Musikhochschule of Cologne. In 1969, he co-founded the free improvisation group New Phonic Art with Jean-Pierre Drouet, Michel Portal, and Carlos Roque Alsina, and then became the head of the instrumental and vocal research department at the IRCAM, a position he held until 1979. From 1983 to 1999, he taught and directed the twentieth century repertoire of the Orchestra Giovanile Italiana of Fiesole (Florence). In 2003, he was named an honorary member of the International Society for Contemporary Music (ISMC).

As a composer, Globokar, as a world citizen without specific ties to any one nation, is difficult to classify. He composes works focused on the relationship between voice and instrument – Discours II to VIII, Mutation for singing orchestra (2006-2007), or between text and music – Voie – in which tradition is confronted with the avant-garde – Kolo, for example, is the name of a Balkan folk dance, and mixes ancient folk traditions with an electronically processed trombone – or inhabited by different cultures: Étude pour Folklora I for ensemble of soloists and Étude pour Folklora II for orchestra (1968), and Élégie balkanique (1992). He believes that any organizational model that exists in nature or culture can become music.

His catalogue, which begins with Plan for four participants and a zarb player (1965) and Voie for narrator, three choirs, and orchestra (1966), now includes more than one hundred compositions in every genre, for orchestra, choir, soloists, and musical theater.

He has conducted his own works with orchestras such as the Westdeutscher Rundfunk; the Orchestras of Radio France, Radio Helsinki, and Radio Ljubjana; as well as with the Warsaw, Jerusalem, and Tokyo philharmonics.

Globokar is also interested in the inventive potential of performers, inviting them to create collectively in works such as Concerto Grosso (1969-1975), Individuum/Collectivum, Ausstrahlungen, written for Michel Portal (1971), or Damdaj for nine improvisational musicians (2009).

Convinced that music today must have a critical stance in contemporary society, Globokar often addresses social issues in his work, notably in Les émigrés (1986), a theme to which he returned in 2012-2014 with L’Exil N°1, L’Exil N°2, and Exil 3, as well as in the opera L’Armonia Drammatica (1987-1990). Questions that are located outside of music (in the political, social, or anthropological worlds, for example) have inspired him to invent new techniques, new materials, and new forms of representation, for example in Les chemins de la liberté for orchestra without conductor (2003-2004) and Masse Macht und Individuum for four soloists and two orchestras (1995).

Many of his works explore theatricality, head-on in Kaktus unter Strom for instruments, electronics, and stage actions (1999), and more obliquely in the cycle Der Engel der Geschichte (2000-2004), where two orchestras face off in a war-like metaphor, or in Das Orchester, in which the composer plays him or herself (1974). This theatricality is often used to explore sound, as in Introspection d’un tubiste (1983). At times, the human body itself becomes the instrument, as in Corporel (1985) or Res/As/Ex/Ins-pirer (1973), which seek a kind of fusion between the instrument and its player. For his seventy-fifth birthday, which was celebrated at the Ljubjana Festival in 2009, Globokar composed Destinées machinales for instruments and musical machines designed by the architect Claudine Brahem, yet another example of what might be called instrumental theatre.