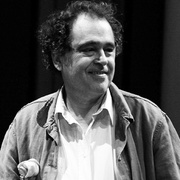 Henry Fourès was born in France in 1948. He studied art history at the University of Montpellier and music at the Conservatoire National de Musique de Paris, where he graduated with highest honors in music theory, analysis, and composition. He pursued his training in piano at the Academy of Fine Arts Vienna and in medieval musicology at the University of Berlin. From 1975 to 1977, he was an intern at the Groupe de Recherche Musicale (INA-GRM).

He was a professor of improvised music at the Conservatoire de Pantin from 1977 to 1980, and then taught medieval musicology from 1980 to 1982 at the University of Toulouse-Le Mirail. In 1980, he created the Phonothèque Régionale des Traditions Orales en Languedoc-Roussillon, a sound archive of oral traditions from the Languedoc-Roussillon area. In 1982, he was appointed Inspecteur principal de la musique (a position overseeing projects funded by the ministry) for the music and dance division of the French Ministry of Culture, and in 1984 was appointed as the Ministry’s Inspecteur général for teaching and training. In 1988, he founded a new department for musical creation within the Ministry, serving as its director until 1990.

From 1991 to 1993, he served as artistic director for the studio La Muse en Circuit. Following that, he worked regularly in Germany (Postdam, Berlin, Cologne, Frankfurt) where he was a guest with various symphonic ensembles and radio broadcasters. From 1996 to 2008, he served as the president of the Laboratoire de Musique et d’Informatique, Marseille.

In 1998, the Musica de Strasbourg festival featured his concert-performance Trio(s), and in 1999 the Capuchos Festival in Lisbon broadcast a monographic concert of his works for instrument and radiophonic equipment; in two sessions in 1999 and 2000 the festival included two concerts devoted to his chamber music compositions.

Fourès’ eclectic approach as a composer and musician has led him to collaborate with artists with highly varied aesthetics and backgrounds (musicians, actors, choreographers, visual artists, directors). He is active in many fields, creating television films and writing scores for cinema, dance, and stage. He is also the author of a number of radio plays and productions (France Culture, HR, WDR). He has written symphonic works and chamber music as well as electronic, mixed, and vocal pieces. He also designs and creates interactive installations and major performance events.

From 2000 to 2009, Henry Fourès served as director of the Conservatoire national supérieur musique et danse de Lyon. Today, he has returned to full-time work as a composer and performer, and, with composer Reinhard Flender, serves as artistic co-director of the French-German OPUS XXI Chamber Music Academy, which focuses on the contemporary repertoire.