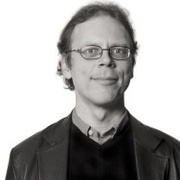 Claude Ledoux was born in Belgium in 1960. He studied painting at the Académie des Beaux-Arts and music at the Conservatoire Royal de Musique in Liège. There, he met Jean-Louis Robert, who introduced him to 20th century music. Ledoux went on to study composition with Frederick Rzewski, Philippe Boesmans, and Henri Pousseur, as well as musical analysis with Célestin Deliège. He received training in electroacoustic music at the Centre de Recherches et de Formation Musicales de Wallonie (now the Centre Henri Pousseur) from 1981 to 1984 with Patrick Lenfant, then pursued his studies in this field in Paris from 1987 to 1989, participating in computer music courses at IRCAM, studying 20th century musical analysis with Robert Piencikowski, and composition with Iannis Xenakis at the Sorbonne. His interest in non-European music led him to deepen his knowledge of Asian musical traditions, and he traveled several times to India, Cambodia, Vietnam, Indonesia, and Japan. One of these trips was funded by a research grant from the SPES Foundation (1996). Several of his pieces reflect the influence of these travels, such as Torrent (1995), a microtonal piece composed after a trip to the Himalayas, or Le Cercle de Rangda (1998) whose musical material is taken from the sounds of Indonesian percussion instruments.

In addition to composing, Ledoux is active in teaching, and has been a guest professor at the Universities of Campinas and of São Paulo (musical analysis and composition courses) in the summers of 2008 and 2009, as well as teaching a winter course at the Campos do Jordão in Brazil in 2009. In May 2013, he gave a series of lectures and master classes at the Shanghai Conservatory. Currently, he teaches composition at the Conservatoire Royal de Musique de Mons and musical analysis at the Conservatoire de Paris (CNSMDP).

From 1998 to 2000, Ledoux was composer in residence with the Musiques Nouvelles ensemble, and then for the 2007 and 2009 seasons with the Palais des Beaux-Arts in Brussels (Bozar), for which he composed several pieces, including his third string quartet, Las Lagrimas de un Angel for the Danel Quartet, as well as an orchestral piece titled Les levants de Tiwanaku, which premiered in a performance by the Belgian National Orchestra in 2009. That same year, he composed the compulsory work for the semi-final of the Queen Elisabeth of Belgium Competition (V…). After a commission from the French Ministry of Culture for La Terre sans Mal, written for the Le Balcon ensemble (which premiered in Paris in 2011), he composed Ayl, a concerto for clarinet, which premiered at the Ars Musica festival in 2012. Several of his works were written out of a desire to intermix popular and art music: Zap’s Init (2008) is a tribute to Frank Zappa, while the riffs and the chorus of Heavy Funk! (2011) evokes Black American music of the 1980s. Dance with Rihanna (and Ligeti behind the door) (2012) translates R’n’B into the idiom of piano, with a nod to György Ligeti. Eastern music, particularly the Japanese tradition, is a presence in his more recent compositions. Courbes d’étoiles VI (2012) is threaded with references to Japan, in particular with its inharmonic sounds, which recall bells, symbolic of Japanese culture. He has composed two concertante pieces for erhu, Crossing Edges (2013) and Echoes of Crossing Edges (2014), which premiered in performances by the Orchestre Philharmonique de Liège and the Shanghaï Sinfonietta, respectively, as well as a piece for shakuhachi and orchestra, S(hakuh)achi Ko(nzert) in 2016. Trois Itinérances, for soprano, alto saxophone, and piano, was composed to commemorate the 150th anniversary of diplomatic relations between Belgium and Japan, and premiered in a performance by the Atom Trio in Tokyo in 2016.

In 2003, Claude Ledoux was awarded the Musical Prize from the Civitella Ranieri Foundation of New York for his work. He has been a member of the Royal Academy of Belgium since 2005. In 2015, the album Fragments, which includes his Notizen-Fragmente - Livre 1 and Notizen-Fragmente - Livre 2, along with a work by Jean-Pierre Deleuze, won the Octaves de la Musique Award.