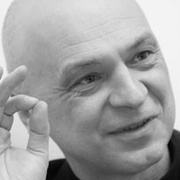 Bernhard Lang was born in Austria in 1957. He began his music studies with the piano, at the Bruckner Konservatorium in Linz, then moved to Graz to continue his studies in classical piano, jazz, and arrangement, where he also studied philosophy and Germanic philology.

From 1977 to 1981, he worked with many high-profile jazz bands, notably the Erich Zann Septett. He began composing with Polish composer Andrzej Dobrowolski, who taught him the techniques of New Music, as well as learning counterpoint with Hermann Markus Pressl, who introduced him to the twelve-tone composition techniques of Joseph-Matthias Hauer. In Graz, he continued his studies with Gösta Neuwirth and Georg-Friedrich Haas, who introduced him to microtonal music.

In 1986, Bernhard Lang composed Zeitmasken for string quartet for the Musikprotokoll festival, launching his career as a composer. During this same period, he also began teaching harmony and counterpoint at the University of Graz, and then composition starting in 2003. At the Institute of Electronic Music and Acoustics of Graz he developed the LoopGenerator and the Visual Loop Generator in collaboration with Winfried Ritsch and Thomas Musil.

Since 1999, his main interest has been in music for the stage, where he applies his work on performance and contrast, notably, as may be seen in his cycle Differenz/Wiederholung (difference/repetition): Das Theater der Wiederholungen (2003), I HATE MOZART (2006), and Der Alte vom Berge (2007). Since 2003, he has worked with numerous choreographers, including Xavier Le Roy, Willi Dorner, and Christine Gaigg; with the latter he premiered NetTrike in 2010, in a double-performance at the IRCAM and in Graz. In 2007, he embarked on a project to examine repetitive structures in the cycle Monadologies, based on a concept that Lang calls “musical cellular processing,” which is derived from Leibniz’s Monadology. The latest work in this ongoing project is Monadology XXXIX (2019).

Lang was a guest lecturer for composition in Luzern in 2013. In June 2018, two concerts dedicated to his work were performed at the Vienna Academy of Music and Performing Arts. Lang has worked on multiple collaborative projects with Austrian musicians, artists, and writers, and is a member of the LALELOO and VLO improvisation groups.