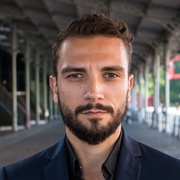 French composer and entrepreneur, born in 1990

Following studies of classical guitar and organ, Benoît Sitzia turned to musicology and composition. He was awarded numerous distinctions throughout his studies of analysis and music history/aesthetics, as well as a C.O.P (a vocational degree) in composition, after which he continued his study of composition at the Paris Conservatoire (CNSMDP).

His works have been performed by numerous ensembles in France and abroad, including Ensemble Intercontemporain, Rayuela, Trio Antara, Maîtrise de Radio France, Chromosphère, the Fractales Collective and Ensemble Orchestral Contemporain.

As the president and co-founder of the Collège Contemporain (an organisation uniting composers, performers, ensembles and musicologists), he actively participates in the creation and management of collectives and cooperatives which seek to valorise and publicise creative musical practices, both in France and internationally.

Named Director General of the Ars Nova Ensemble, he is committed to overseeing the continued evolution of this historical institution of contemporary music. His is also active in promoting the performance of new works in France and abroad through his work directing classical and contemporary music festivals associated with the SPEDIDAM Network. Finally, he is Classical Music Director of the Imperial Annecy Festival in Haute-Savoie

An outspoken advocate of the importance of pedagogy and inclusivity, he works tirelessly to attract new, broader audiences to classical and contemporary music events. His work also extends to improving the artistic ecosystem by raising awareness among artists of the tools which exist to support culture. In this respect, with support from the public and private sectors, he founded and supervises the European Creative Academy for Music & Musicians.