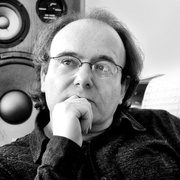 José Manuel López López was born in Madrid, Spain, in 1956. He studied piano, composition, and orchestral conducting in the Madrid Conservatory and then continued his studies at the Université de Paris VIII, in the field of musicology, where he is now a professor and the director of the University’s Composition Workshop. He holds a specialized DEA degree in 20th-century music from the IRCAM and the École des hautes études en sciences sociales (EHESS), and also studied composition with Luis De Pablo, Olivier Messiaen, Luigi Nono, Pierre Boulez, and Franco Donatoni, and participated in Cursus (IRCAM’s composition and computer music course).

López López was selected multiple times to represent Spain in the UNESCO International Rostrum of Composers, and his music has won prizes from the International Society for Contemporary Music and the International Computer Music Conférence, as well as being performed in major festivals around the world. He has received many commissions, including from the French and Spanish Ministries of Culture, the Caja Foundation in Madrin, IRCAM, Studio Agon and Nuove sincronie in Milan, the National Orchestra of Spain, Arditti Quartet, the Gulbenkian Foundation in Lisbon, Radio France, the Musica de Strasbourg festival, and CIRM in Nice.

In 1996, he was awarded a fellowship from the AFAA (Association française d’action artistique) for a composition project titled Haïkus d’automne at the Villa Kujoyama in Kyoto. In 1997, he was a fellow of the Spanish Academy of Fine Arts in Rome. In November 2000, he was awarded the Spanish Premio Nacional de Musica. From 2000 to 2003, he was in residency in Burgundy, France, and in 2004 at the Cátedra Manuel de Falla de Cadiz in Spain. In 2011 he held a residency at the Civitella Ranieri Foundation in Umbria, Italy; he was a collaborative musical consultant for the BBVA Foundation in Spain, was a guest professor and composer at the Internationale Sommerakademie Universitat Mozarteum in Salzburg, and held a research residency at the Studio Art-Zoyd in Valenciennes.

In addition to being an active composer and lecturer, as well as his teaching responsibilities at the Université de Paris VIII, López López served as a professor of composition at the Conservatory of Music of Zaragoza from 2005 to 2007, and from 2008 to 2010, served as artistic director of the Auditorio Nacional de Música in Madrid.

Through his compositions, written for many types of formations, ranging from solo pieces such as Lo fijo y lo volatil for piano and sampler (1994) to large orchestral works such as Chronos (1986), and including pieces for voice and chamber music, López López reflects on the scientific and philosophical nature of sound, in the tradition of composers such as Grisey, Nono, Sciarrino, Lachenmann, and Vaggione, as well as Iannis Xenakis, to whose memory he dedicated two of his compositions: Hybris (2002) and Metro vox (2011). His work is also inspired by literature, in particular of the 12th century author Pedro Alfonso – De Silentio (1987), Sottovoce (1995) – as well as folk tales – La Pluma de Hu (2000) – and contemporary texts, such as the poems of Dionisio Cañas – …..agosto 2007…... Reading haikus during his travels in Japan inspired him to write Haïkus d’automne (1997), Viento de Otoño (1998), and Le parfum de la lune (2003). In 2005, Chinese poetry inspired El arte de la siesta. He collaborated with José Manuel Broto for Estudios sobre la modulacion métrica (2003). In 2004, he created a multimedia opera, La noche y la palabra, and that same year composed La Céleste for live percussion and recorded audio sequences, with video by Pascal Auger. He has created two sound installations with the visual artist Francis Naranjo: Insolación (2009) and Infierno doméstico (2011).