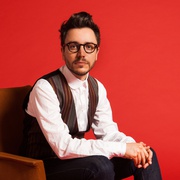 Italian composer born in Trento in 1979.

Born in Trento, Italy, in 1979, Matteo Franceschini studied clarinet with Mauro Pedron at the Conservatorio di Trento, and then attended the Conservatorio Guiseppe Verdi in Milan, where he studied with Armando Franceschini and Alessandro Solbiati. In parallel, he took courses with Luca Francesconi, Wolfgang Rihm, and Pascal Dusapin and studied orchestral conducting with Sandro Gorli. He continued his studies at the Accademia Santa Cecilia in Rome with Azio Corghi and then participated in Cursus (IRCAM’s composition and computer music course) from 2006 to 2008.

He has won numerous prizes in international competitions and has received commissions from organizations such as La Scala Philharmonic Orchestra, the Ensemble Intercontemporain, Wigmore Hall, the Venice Biennale, the IRCAM/Centre Pompidou, the Mito Festival, the Philharmonie de Paris, the Orchestre national d’Île-de-France, the Belgian National Orchestra, the Opéra de Saint-Etienne, the Accademia Filarmonica of Rome, RAI (Italian Television and Radio), the AGON Institute (Acoustics/Computing/Music), and multiple festivals. His compositions have been performed in major international festivals (Venice Biennale, Milano Musica, Sound Ways in Saint-Pétersburg, Nederlandse Muziekdagen, Settembre Musica in Turin, Rondó in Milan), at the IRCAM, the Centre Acanthes, the Beijing Conservatory, in the concert seasons of the Belgian National Orchestra and the Philharmonic Society of Trento; they are regularly broadcast by the RAI (Italy) the RTSI (Switzerland), the NPS (the Netherlands), and the RTBF (Belgium).

In 2006, he joined the AGON Institute, one of Italy’s most important centers for acoustics and computer music. He has also created soundtracks, works for theater, and multimedia tools, such as X, an interactive installation created in 2005 in collaboration with Adriano Abbado for the Milan Triennale. In June 2008, laCuna, for woman’s voice, vocal ensemble, video, and electronics, a project created for the second year of IRCAM’s Cursus, premiered during the Festival Agora in a performance by Raphaële Kennedy and the Jeunes Solistes, conducted by Rachid Safir.

In April 2011, his first monographic recording was released, titled Il risultato dei singoli. He was a composer-in-residence at the Atelier de Recherche et de Création pour l’Art Lyrique (ARCAL), the Orchestre national d’Île-de-France, and at the Accademia Filarmonica of Rome.

In 2017, Matteo Franceschini took the stage name “Tovel” for the project ABCDEFG (A Tuned Sculpture), with the goal of “relaunch[ing] the figure of the author/interpreter. His direct, live involvement becomes therefore the expression of a creative act.”

Matteo Franceschini’s music is published by Suvini Zerboni, and, since 2011, by Casa Ricordi.