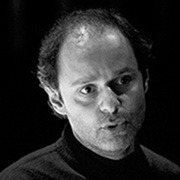 Zad Moultaka took up the piano at the age of five, going on to study the instrument with Madeleine Médawar at the Beirut Conservatory. In 1984, fleeing the civil war in his home country, he moved to Paris, where he studied piano and chamber music at the Conservatoire (CNSMDP), graduating with highest honours. He subsequently pursued a career as a pianist, which he abandoned in 1993 in order to focus on composing and painting.

Zàrani(2002) for contralto, oud, piano, and percussion, commissioned by the Beiteddine Festival, is a re-interpretation of traditionalmuwashshah songs (a secular Arabic musical genre), in which the piano serves to destabilise and prolong the lyrical material. This work marked a turning point in Moultaka’s style, comprising a synthesis of Western (e.g., melodic linearity) and Eastern (traditional modes and divisions of the octave) styles.

In 2004, several of his works were premiered at the 38th “Rugissants de Grenoble” Festival by Ars Nova Ensemble and the Les Eléments Chamber Choir: Fragment B118 (a setting of a text by Empedocle), inspired by ancient Syriac chants; Enluminures, for nine female voices, a setting of poems by Georges Schehadé and a reflection on the nature of exile which borrows various “rural” vocal techniques (e.g., the cries of shepherds, zalaghyt, a sort of wailing performed by women at weddings, and vocal funeral lamentations); and Fanàriki, a concerto for cymbalum and chamber ensemble, based on the text Seven War Songs by Russian poet Ivan Silinski.

His first opera, Zajal, was premiered by Fadia Tomb El-Hage and Ars Nova Ensemble, conducted by Philippe Nahon. The work is a contemporary homage to the Zajal tradition, a form of Mediterranean poetry and vocal “jousting”. It deals with notions of collective memory, the relationship between tradition and modernity, and ethnic roots, while at the same time exploring the possibility of a truly Arabic form of opera.

In 2013, he received commissions from Radio France for the Présences Festival and the Alla Breve programme on France Musique, giving rise to Callara I, a work based on pre-Colombian texts prophesising the end of the world and the fall of Mayan civilisation in which a string quartet surrounds a solo alto; and Il Regno dell’Acqua, a five-movement work for chamber ensemble exploring themes of water and light, in which each movement is dedicated to a different part or characteristic of the city of Venice.

In 2004, along with Catherine Peillon, he co-founded Mezwej, an instrumental and vocal ensemble of varying size which endeavours to explore and mix the syntaxes of Western and Arabic musics. Invited for residencies at Royaumont from 2007 to 2009 and the Metz Arsenal in 2017 and 2018, Mezwej has premiered some fifty works by around twelve composers, including Moultaka’s own works: La Passion selon Marie (2011), a contemporary Syriac oratorio for soloist, mixed choir, and ensemble of baroque instruments; and La Passion d’Adonis (2015), a setting of texts by Syrian poet Adonis for oud, violin, percussion, and electronics.

Zad Moultaka composed Montée des ombres for Nuit Blanche in 2016, a procession of around 100 singers, led by twelve members of the Musicatreize Ensemble through the Tunnel des Tuileries (in Paris), immersing the audience in the sounds of the earth and water (diffused via loud-speakers), while on the walls, ghostly projections emerge from flowing water.

UM souverain moteur de toute chose for six singers, 11 instrumentalists, and electronics, a sonic meditation inspired by the Tibetan Book of the Dead, commissioned by IRCAM, the Ile de France Festival and Ars Nova, was premiered in October 2016 at the Jean-Vilar Theatre in Montpellier.

In addition to his work as a composer, Moultaka is active as a visual artist. In this capacity, his works have been displayed in numerous cities, including Beirut, Abu Dhabi, Venice, and Paris. In 2017, he was commissioned by the Lebanese Ministry of Culture to create the country’s pavilion at the 57th Venice Biennale.

Zad Moultaka’s creative output, both in the musical and visual fields, is marked by in-depth exploration of a set of core notions: history, war, memory, contemporary society, and the nature of borders, both visible and invisible.

His scores are published by Onoma Editions. Several of his works have been released on the Empreinte Digitale label.