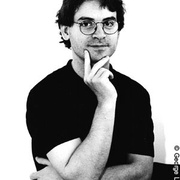 Born on 28 March 1972 in Geneva, Switzerland, Xavier Dayer studied composition with Eric Gaudibert at the Conservatoire Populaire de Musique de Genève and classical guitar with Matthias Spaeter at the Freiburg Conservatory of Music, from which he graduated in 1995. That same year, he was a finalist in the Lausanne Young Chamber Orchestra Composers Competition and received a Prix du Conseil d’Etat from the Canton of Geneva. In 1996, he continued his training, studying with Heinz Holliger in a composition session in Bienne, Switzerland, as well as participating in Cursus (the IRCAM’s composition and computer music course) where he studied with Tristan Murail and Brian Ferneyhough. In 1998, he participated in the Voix Nouvelles composition session at the Abbaye de Royaumont with Brian Ferneyhough, Antoine Bonnet, and Jean-Marc Singier.

The first major performance of his music was a portrait concert in 1998 at Geneva’s Festival Archipel by the Ensemble Contrechamps, in which Dayer’s Hommage à François Villon and J’étais l’heure qui doit me rendre pur were premiered. In just a few years, he developed an international reputation, receiving numerous commissions (including from IRCAM, the Grand Théâtre de Genève, the Orchestre de la Suisse Romande, Stuttgart’s SWR-Vokalensemble, Ensemble Contrechamps, Neuen Vocalisten Stuttgart, Niew Ensemble Amsterdam, the Orchestre de Chambre de Lausanne, Festival Archipel, and Festival Amadeus). He received multiple prizes and fellowships, including a fellowship from the Fondation Patiño/Ville de Genève at the Cité Internationale des Arts in Paris (1996/1997), the city of Bochum (Germany)’s A Capella Composition Competition Award (1998), the Marescotti Foundation Prize (Geneva 1998), the Fondation Bügi-Willert Award presented by Heinz Holliger (2000), and the Edouard & Maurice Sandoz Foundation Prize presented by Henri Dutilleux (2000). He was a resident of the Villa Médicis in Rome in 2008/2009.

Since the 1999 premiere of his chamber opera Le Marin, based on Fernando Pessoa’s static drama, at the Festival Amadeus in Meinier (Geneva), Dayer has continued to compose music inspired by Pessoa’s writing. In 2001, he held a residency at the Bogliasco Foundation’s study center in Bolgliasco, Genoa (Italy), and his work was selected by the jury of the Gaudeamus Festival in Amsterdam. In 2002, he was also selected by the IRCAM’s reading committee. In 2004, the Paris Festival d’Automne dedicated a concert to his work. His opera Mémoires d’une jeune fille triste premiered at the Grand Théâtre de Genève in May 2005. The Atelier Lyrique of the Opéra National de Paris commissioned his chamber opera Les Aveugles, which premiered in June 2006. The IRCAM commissioned Delights for eight vocalists, instrumental ensemble, and electronics, which premiered in May 2007 in a performance by the Ensemble intercontemporain.

Xavier Dayer teaches composition and theory at the Haute Ecole des Arts de Berne (HKB) and musical analysis at the Conservatories of Neuchâtel and Geneva (CPM). His music is published by Éditions Papillon.