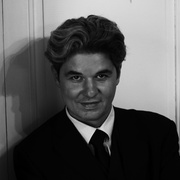 Wilfried Wendling studied music theory at the Reuil-Malmaison Conservatory and then at the Paris Conservatory (CNSMDP), before focusing on composition, which he studied with Georges Aperghis and Philippe Leroux.

Fascinated by theatre from an early age, in 1995 he founded the Compagnie Prométhée, for which he composed and directed numerous interdisciplinary performances which were notably presented at the Amandiers Theatre (near Paris), Odéon-Théâtre de l’Europe, le Centquatre, and the Maison de la Poésie in Paris, where, with support from the French Ministry for Culture and the SACEM, he was associate artist from 2010 to 2012. He has worked with artists such as Jacques Jouet, Luc Boltanski, and Olivier Cohen.

Along with Thierry Coduys, Wendling established the group “La Kitchen”, for which he was musical assistant and computer music designer on several projects, including with composers Ivan Fedele, Jean-Baptiste Barrière, and Pascal Dusapin.

His compositions have been performed in France in venues such as Césaré (Paris), Grame (Lyon), les Instants Chavirés (Montreuil), and La Muse en Circuit (Alfortville), as well as in several national theatres and festivals, such as Musique Action, Présences, and Extension du domaine de la note.

From 2000 to 2006, he worked with Ensemble Diffraction, a group dedicated to interdisciplinary performance involving text and electronics. The ensemble premiered several “sonic theatre performances,” including at the Nuit Blanche in Paris, Opéra Comique, Théâtre de la Cité Internationale, the Gaité Lyrique, and elsewhere in France and abroad.

Since 2008, he has been working as a composer, computer music designer, and video artist with Roland Auzet. The two have created numerous interdisciplinary projects, including Deux hommes jonglaient dans leur tête.

Wilfried Wendling has also created several sound installations which have been featured in various exhibitions, including at the Cube in Issy-les-Moulineaux.

From 2008 to 2010, he was a member of the KERNEL Ensemble, founded by Kasper T. Toeplitz. As an electro-acoustic performer, he has worked with Denis Lavant, Hélène Breschand, Donatienne Michel-Dansac, Thomas Fersen, Jac Berrocal, Pablo Cuecco, David Jisse, Natacha Musléra, Philippe Cornus, Hélène Labarrière, Sylvain Kassap, and Jacques Tholot, among others.

In 2013, Wendling was named director of Muse en Circuit, a national centre for new music in France.