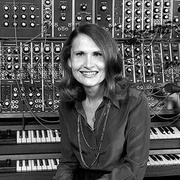 Born with the name Walter Carlos in 1939 in Rhode Island (USA), Wendy Carlos began learning piano at the age of six. Fascinated by the sciences from an early age, she built a hi-fi sound system for her parents and won a science prize for a homemade computer at the age of 14. She studied at Brown University, graduating with a double degree in music and physics, and went on to earn a masters in composition at Columbia University, where she studied in the first center for electronic music with pioneers Otto Luening and Vladimir Ussachevsky. She began working as a recording engineer and met Robert Moog at the autumn convention of the Audio Engineering Society, where he had come to present his modular synthesizer.

Moog and Carlos became friends and collaborators, working together on a custom modular synthesizer system that would go on to feature in her first album titled Switched-on Bach. Carlos chose Bach through personal affinity and because his compositions were particularly adapted to transcription for synthesizer; each piece was reproduced note-by-note and instrument-by-instrument. She also chose Bach because his works were so widely known, making it possible for listeners to easily grasp the role of electronics in the performance. In 1992, she issued a remastered version of the album using unequal temperaments, thereby giving listeners a chance to experience the many advances made by synthesizer music in the 25 years since the first album was released. Switched-on Bach sold over a million copies and won three Grammys; it was the first classical music album ever to achieve platinum status in the United States.

Carlos’ second album, The Well-tempered Synthesizer (1969), featured pieces by Monteverdi, Handel, and Scarlatti, as well as by Bach. It was praised by Glenn Gould as being one of the best performances of the Brandendburg Concertos he had ever heard. Carlos then went on to compose Sonic Seasonings (1972), which is considered to be one of the first ever ambient music albums, three years before Brian Eno’s Discreet Music (and six years before he coined the term “ambient music”). Her early work was reissued under the name Wendy Carlos starting in 1979.

Her first two albums brought her to the attention of Stanley Kubrick, who asked her to apply the same technique she had used for the Switched On albums to adapt Beethoven and Purcell for the score of A Clockwork Orange (1971). Her original score for the film was the first time a vocoder was used in a recorded song. Kubrick also called on Wendy Carlos for original compositions for the soundrack to his film The Shining (1980); she also composed the score of the Walt Disney feature Tron (1982), which mixed symphony orchestra and digital and analog synthesizers. Two years later, in Digital Moonscapes, she digitally replicated orchestral timbres in instrumental, hybrid, and imaginary sounds that she dubbed the LSI Philharmonic Orchestra, which she would reuse in 1988 in her humorous revisiting of Peter and the Wolf, in collaboration with Weird Al Yankovic.

Between 1992 and 1995, she worked with Larry Fast on creating a digital process of soundtrack restoration and surround stereo conversion called Digi-Surround Stereo Sound. She is a member of the Audio Engineering Society, the Society of Motion Picture and Television Engineers, and the National Academy of Recording Arts and Sciences. She has consulted with several Macintosh developers. In April 2005, Wendy Carlos received the SEAMUS Life Achievement Award “in recognition of lifetime achievement and contribution to the art and craft of electro-acoustic music” since the 1960s.