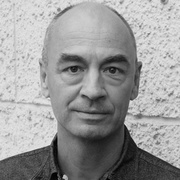 Walter Feldmann was born in Glarus, Switzerland, in 1965. He studied French, Latin, and musicology at the University of Zurich, and flute with Dominique Hunziker in Aarau. He plays the flute in various orchestras as well as in the ensemble Les joueurs de flûte. A self-taught composer, he began writing his first compositions in 1986. In 1991, he founded Ensemble S in Zürich. In 1992, he began co-organizing the Tage für Neue Musik Zürich festival, and served as its artistic director from 1994 to 2003. In 1993, he participated in the IRCAM’s first summer academy, and was then selected to participate in a summer course in computer music there in 1996.

Walter Feldmann includes scenic, spatial, and light effects in his compositions. As a flutist and a composer, he works closely with the choreographer Gabriel Hernández (tHEL danse) in Paris, notably for how many parts of it – the one, – and (…), nr. 1 the one, a co-production of the IRCAM and the Biennale nationale de danse of Val de Marne (2001-2002) and fr.gm.nts - “ .o. .a.y “, choreographic games for flute, viola, and electronics (2002), as well as for an electronic piece entitled “sspd” / “sspd” saturé (2004).

After a cycle based on Les Géorgiques by Claude Simon, “tellement froid que” (1996), “comme si le froid” (1998) and “n’était le froid” (1999-2001), he drew inspiration from the writing of Anne-Marie Albiach for a concerto for viola and ensemble “monstrueuse vécut dans le cadre” la mémoire, which premiered in Paris in 2004 in a performance by Odile Aubouin and the Ensemble intercontemporain. This was followed by a major triptych titled “une géométrie” (2005-2007). Another cycle of compositions for piano based on these texts followed.

Walter Feldmann received the Composition Prize of the City of Zurich in 1999, and the Etat Pro Arte Foundation Prize in 2003. His music is published by Carus Verlag Stuttgart. He teaches flute at the Alte Kantonsschule Aarau, and lives and works in Zurich.