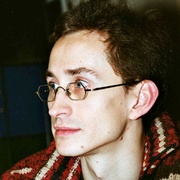 Lithuanian composer born in 1972 in Vilnius.

Vykintas Baltakas was born in Vilnius in 1972. From 1990 to 1993, he studied at the Vilnius Music Academy with Vytautas Barkauskas. From 1993 to 1997 he attended the Hochschule für Musik in Karlsruhe, studying composition with Wolfgang Rihm and conducting with Andreas Weiss. In 1997, he traveled to Paris to study composition with Emmanuel Nunes at the Conservatoire national supérieur de Paris. From 1994 to 1997 he also studied at the International Peter Eötvös Institute. He received a fellowship from the Heinrich-Strobel Foundation of Freiburg in 1996, and from the Herrenhaus Edenkoben in 1997. He participated in the Darmstadt Summer Courses from 1994-1996, and in the 1999-2000 Cursus (the IRCAM’s composition and computer music course). He received research fellowships from the Fondation Internationale Nadia et Lili Boulanger in Paris in 2000 and in 2002.

In Vilnius, he founded and directed the Penki Vejai vocal ensemble and the Aidija chamber choir. In 2009, he founded the Lithuanian Ensemble Network (LEN). As a conductor, he has worked as an assistant to Peter Eötvös since 1995; served as the music director and conductor of the Ensemble du nouveau Siècle in Strasbourg from 1995 to 1997, and has received awards such as the Youth Conductors’ Competition Prize in Kaunas in 1990 (second prize) and the Bad Homburger Conductors’ Competition prize in 2002.

In 2015, he was appointed professor of composition at the Maastricht Conservatory and was a guest professor at the Royal Conservatory of Brussels. In 2016, he gave lectures and seminars at the Royal Academy of Music in London. That same year, he took over as head of the masters program for contemporary music performance at the Lithuanian Academy of Music and Theatre.

His music has been performed by renowned musicians in major festivals: Poussla at MaerzMusik in Berlin in 2002; Ouroboros - Zyklus I at the Witten Festival by Klangforum Wien in 2005, (how does the silver cloud s)ou(nd?) at the Festival Musica de Strasbourg in 2006; b(ell tree) was premiered by the Arditti Quartet in 2007, Lift to Dubai by Ensemble Modern in 2009; and Scoria by the Munich Radio Orchestra at musica viva in 2010.