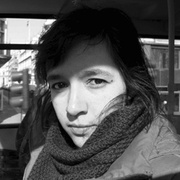 Violeta Cruz was born in Bogotá, Colombia, in 1986. She received her bachelor’s degree in composition in 2009 from Javeriana University (Bogotá), where she studied with Harold Vásquez and Guillermo Gaviria. She continued her studies at the Conservatoire de Paris (CNSMDP), studying composition with Stefano Gervasoni. She was an artist-in-residence at the Second World Acoustic Ecology Congress in Saillon, Switzerland in 2012. The following year, she participated in Cursus (the IRCAM’s composition and computer music course). In 2016, she was a fellow at the Villa Médicis.

In 2013, her Cyanea for orchestra premiered in London, performed by the Southbank Sinfonia. That same year, she was selected to participate in IRCAM’s ManiFeste Academy with her acousmatic piece Intersticios - 3,99, for Éric Oriat’s film Plus Tard, produced by Le Fresnoy - Studio National des Arts Contemporains. Her God Game: el nuevo mito de Los Lemmings, for violin, acoustic object, and electronics, premiered in 2014 at the IRCAM in the Cursus concert. She received a commission from Accentus to compose The Lake of my Mind for choir, which was premiered in 2016 by the Paris Youth Choir. Her opera La Princesse légère for four vocalists, two actors, ten musicians, and electronics, commissioned by the Opéra Comique, with a libretto by Gilles Rico and directed by Jos Houben, premiered in December 2017 at the Opéra de Lille.

Cruz’s work includes instrumental and electroacoustic pieces as well as “acoustic objects,” mechanical devices with rhythmic and practically random behaviors, whose sounds are augmented by interactive electronics. One of Cruz’s major preoccupations is the relationship between sound and matter: in the context of instruments, this translates to work on musical texture (the relationship between the sound strata comprised in a musical whole); in the case of her “acoustic objects,” this translates to an interest in elementary matter such as light or water.

Her compositions have been performed in France, Germany, the Netherlands, Italy, the United Kingdom, Spain, Colombia, and Peru. She has participated in many festivals, including Fabbrica Europa in Italie, the FIMCC in Peru, Musique de Notre Temps in France, and the Festival Nacional de Música Contamporánea in Spain. Cruz has collaborated with ensembles such as the Orquesta Sinfónica de Caldas, the Orquesta Sinfónica de Colombia, Ensemble Court-Circuit, the Prime Ensamble, and Duo Atyopsis.

In 2007, she won Colombia’s National Composition Prize for Young Composers; in 2013, she won the Composition Competition of Orquesta Sinfónica Caldas (Colombia); and in 2015, the Foundation Francis and Mica Salabert Award. In 2020, she was awarded the Prix Pierre Cardin by the French Académie des Beaux-Arts.