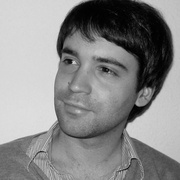 Torsten Herrmannwas born in 1981 in Jülich, Germany. He began learning music with trombone and piano lessons, then enrolled at the Cologne University of Music, where he studied piano with Klaus Oldemeyer, counterpoint with Thomas Daniel, and composition with York Höller. He graduated in 2005, then went to Berlin, where he studied at the Hanns Eisler Hochschule with Hanspeter Kyburz and Wolfgang Heiniger. Concurrently, he studied mathematics and philosophy at Berlin’s Humboldt University. In 2008-2009, he studied composition with Frédéric Durieux, orchestration with Marc-André Dalbavie, and electronic music with Yan Maresz at the Conservatoire de Paris (CNSMDP). In 2015-2016 he participated in Cursus (IRCAM’s composition and computer music course).

Herrmann participated in the Darmstadt Summer Courses in 2004 and 2006. Nexus, for ensemble, premiered there, conducted by Lucas Vis. In 2010, Hermann participated in master classes with the Ensemble Intercontemporain, directed by Susanna Mälkki; the Ensemble performed Nexus again at the Pompidou Center in Paris on 15 April 2011. Other masterclasses include the Orchestra Workshop for Composers with the Radio Sinfonieorchester Stuttgart of the SWR, with Matthias Pintscher conducting, and the International Composition Seminar of the Ensemble Modern Academy, conducted by Johannes Kalitzke, in 2011.

In 2001, Hermann won first prize in the Young Composers of North Rhine-Westphalia competition for his string quartet Palindrom. In 2003, Guido Schiefen premiered his 4 Inventions for solo cello in Salzburg. In 2004, he won the 42nd Darmstadt International Summer Course Fellowship. In 2005, his piece Monochrom premiered at the Rhein-Sieg Festival in Petersberg, near Bonn. He received the Studienstiftung des deutschen Volkes (Fellowship of the German National Academic Foundation) for 2006-2009. In 2010, he was awarded first prize at the Hanns Eisler Competition as well as the Freestyle Competition of the Alvarez Chamber Orchestra in London.