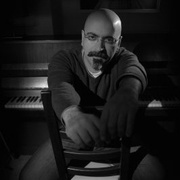 Turkish composer born in 1971 in Istanbul.

At the age of 11, Tolga Tüzün began studies of the piano with Meral Beseli, gradually becoming acquainted with avant-garde electronic music and jazz, which he studied intensively during his years at university. Upon graduating from the French section of the University of Marmara with a degree in political science, he embarked on a career as a musician. He studied jazz theory and composition briefly with Aydin Esen, but learned music theory independently. In 2000, he enrolled at the Istanbul Technical University Center for Advanced Studies in Music (MIAM), where he studied composition with Pieter Snapper and Mark Wingate, and orchestration with Hasan Uçarsu and Ilhan Usmanbaş. Around this time, his first compositions for chambre ensemble were performed. In 2002, Tüzün moved to New York, where he obtained a doctorate from Columbia University under the supervision of David Olan and Tristan Murail.

In New York, his works were performed by Cygnus Ensemble, Composers Alliance, and the Contemporary Ensemble. His electronic pieces were featured at international festivals and symposia such as June in Buffalo, the Brooklyn College 10th Electro-acoustic Music Festival and the 6th International Literature and Humanities Conference.

During his time in New York, he also served as an artistic advisor and technical director of the New York Sounds French and Stephan Wolpe Festivals, and was on the artistic committees of Argento Ensemble and Speculum Musicae.

From 2002 to 2005, he taught music history, theory, and composition at the Brooklyn College Conservatory of Music.

In 2005-2006, he moved to Paris to undertake the IRCAM Cursus (IRCAM’s composition and computer music course).

Since 2007, he has taught composition and electronic music at Bilgi University in Istanbul, where he was named Director of the Music Department in 2010.

Tüzün’s music, in line with his influences and representative of the period marking the beginning of the 21st century, prioritises the exploration of timbre. His works are conceived as musical fluxes, thereby avoiding commonplace forms. He often makes reference to fields outside of music, creating models upon this basis using digital technology, such as sonic morphing and transformative processes, or multiple layers of harmony and rhythm. Musical space and perception are the fundamental parameters in his works.