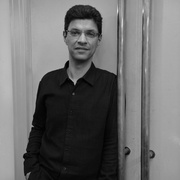 Thierry Pécou studied orchestration and composition at the Paris Conservatoire (CNSMDP). In 1994-95, he was a resident at Villa Medici extra muros, and in 1997-98, at Casa de Velázquez in Madrid.

He founded two ensembles, Zellig (in 1999) and Variances (in 2009), with whom he regularly performs as a pianist; the latter group serves as a platform for combining contemporary works and oral musical traditions. Pécou regularly performs his own works on the piano, both as a soloist and in chamber music settings (e.g., Les machines désirantes, concertino for piano with Ensemble Zellig, and Tremendum with the BBC Symphony Orchestra).

In his music, Pécou often integrates elements from cultures which are remote both geographically and temporally, e.g., the languages and folklore of the pre-Colombian Americas and Amerindian societies in Symphonie du Jaguar and the cantata Passeurs d’eau; Greek mythology in Les filles du feu; allusions to African and American cultures, but also ancient China and Tibetan mysticism, in Tremendum - Concerto Carnaval, Outre-Mémoire, and L’Oiseau innumérable.