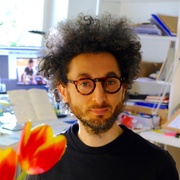 Stefan Prins studied composition and piano at the Antwerp Royal Conservatory, graduating with a Master’s degree in composition in 2009, alongside studies of music technology, the philosophy of technology, and sonology at Brussels Koninklijk Conservatorium, Antwerp University, and the Royal Conservatory in The Hague. In 2017, he received a Doctorate in composition from Harvard University, where he studied with Chaya Czernowin. He also participated in several masterclasses, allowing him further study with Georges Aperghis, Richard Barrett, Chaya Czernowin, Karlheinz Essl, Beat Furrer, Enno Poppe, Steven Tagasuki, and Vladimir Tarnopolski.

Prins is co-artistic director, along with Pieter Matthynssens, of the Belgian contemporary music group Nadar Ensemble. He regularly performs with the improvised music collective reFLEXible, of which he is a founding member, and whose performances often include video, dance, and installations. He is also a member of the group “Ministry of Bad Decisions” (with Yaron Deutsch, electric guitar, and Brian Archinal, percussion).

In his activities as both a composer and an improvisor of electronic music, Prins is interested in exploring the relationships between human beings and technology, focusing on the ways in which the latter has influenced the human condition in contemporary society through the widespread use of social media, webcams, video surveillance, video games, and smartphones. In particular, he probes the line which separates the real from the virtual (cf. Generation Kill, 2012).

He has received numerous accolades, including the KBC Aquarius Composition Award for Young Composers (Brussels, 2001), Week of the Contemporary Music (Ghent, 2006; 2nd Prize), Staubach Honorarium (2009), International Impuls Composition Award (Graz, 2009), and the Kranichsteiner Musikpreis for Composition (2010). In 2012, he was named Belgian Musician of the Year by the Union of Belgian Music Critics, and in 2014, he was awarded the ISCM Young Composers Award and became a laureate of the Royal Belgian Academy of Arts and Sciences. In 2016, he received the Berlin Kunstpreis für Musik.

Recordings of several of his works have been released on the Wergo, Neos, and Sub Rosa labels.