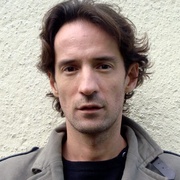 Sebastian Rivas started out performing jazz, rock, and improvised music before turning to composition. In 1997, he emigrated from Argentina to France, his country of birth, to study with Sergio Ortega and Ivan Fedele. He participated in several masterclasses, notably at IRCAM, Centre Acanthes, Royaumont, and with the Ictus Ensemble, during which he studied with Klaus Huber, Brian Ferneyhough, Jonathan Harvey, Michael Jarrell, and François Paris. In 2004, he undertook the IRCAM Cursus (IRCAM’s composition and computer music course), allowing him further study with Philippe Leroux.

He received the ISCM Prize in 2004, was selected for an Ensemble intercontemporain “Tremplin” commission in 2008, and was awarded the Prix Italia in 2012 for his radio opera, La Nuit Hallucinée. His opera, Aliados, with a libretto by Esteban Buch and directed by Antoine Gindt, was premiered in June 2013 at ManiFeste.

Sebastian Rivas was a resident at Villa Medici from 2013 to 2015, and at the Cité Internationale des Arts in Paris in 2015. In 2017, he started the arts/science doctoral programme at CIRM-National Centre of Musical Creation. In June 2018, his work We must, for contrabass and electronics, was premiered at ManiFest. He was awarded the Silver Lion at the Venice Biennale International Festival of Contemporary Music in October 2018.

In September 2018, Rivas became co-director, along with Anoux Avisse, of the GRAME-National Centre of Musical Creation.