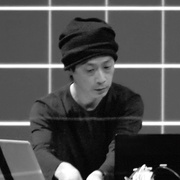 Japanese composer and visual artist born in 1966 in Gifu.

Born in 1966 in Gifu (Japan), Ryoji Ikeda is a visual artist and composer of minimalist electronic music. At the age of thirteen, he began playing guitar in a rock band, but showed little aptitude or any particular appetite for practising instrumental music. At eighteen, he left his hometown to study at the University of Tokyo, although today he insists he has no memory of the name of his university program or what he studied there. After (miraculously) receiving a degree, he remained in Tokyo, working as a DJ in the city’s night clubs, where he says he “learned everything.”

With other alumni of the university, he founded the multidisciplinary collective Dumb Type, which included dancers, architects, visual artists, performers, and musicians. Together, they interrogated and gave body to data flows with language strongly inflected by new computer technologies: they produced several pieces (pleasure life, s/n, lovers), which allowed them to travel, to hone their techniques, and to affirm their critical stance. It was during this period that Ikeda’s approach to creating his work became systematically collaborative. Thanks to Dumb Type, he made it a habit to work with programmers, designers, computer engineers, and architects. Ikeda has no mentor or model that he follows: he has only collaborators.

The music critic Atsushi Sasaki, who is close to Ikeda, recalls that for a long time he had no idea that his friend was a musician. “One day, he suddenly said to me, ‘actually, I do sound,’ and then time went by, and then I got this white CD.” It was 1000 fragments, the composer’s first album, which comprised three pieces: Luxus, 5 zones, and Channel X. From that time on (1995), Ikeda’s language was definite and structured, using very high and very low frequencies, evoking computer tools such as radar, and featuring rhythmic patterns layered with minute precision. What followed only added levels of complexity and new textures to an already coherent whole: in 1996, Ikeda completed +/- and headphonics, and in 1998, 0°, C, time, and space. Before the turn of the century, the Y2K Bug, the spread of personal computers, and the rise of the internet, Ikeda knew full well that his aesthetic was intrinsically and definitively linked to sounds and to machines.

There are a few exceptions to this, however. The first is the series Op. (short for ‘opus’) for string ensemble. The series, which appears on an eponymous album, is the most accessible in his catalogue as it stands. Nevertheless, it features many of the ingredients in his “computer” works, such as ethereal high notes (violins), calibrated silences, panoramic sound distribution, and extreme concision in the writing. The second was composed some fifteen years later, a percussion suite in the Op series (Body MusicandMetal Music).

The idea of polarity recurs throughout all of Ikeda’s work. His album covers (which he creates himself) are exclusively black and white. The numbers 0 and 1 run through the titles of his pieces, as well as their content. Behind these extremes is the question of the infinite: +/-, for example, represents the infinite number of decimal places between the numbers 0 and 1. For this reason, it is important to note that his pieces are strongly influenced by his interest in (not to say his obsession with) mathematics, as is evident in his collaboration with Harvard mathematician Benedict Gross on the cycle V≠L. At times, Ikeda creates with no sound at all, working on paper and aluminium.

His fascination with the sciences extends to quantum mechanics, which was the inspiration behind superposition, although he points out that his works can never be interpreted as one-dimensional, and that they are inspired by scientific data without paraphrasing them; the titles of his works are meant to spark many different significations for visitors. His approach, he says, is above all “practical” and not “conceptual,” and his method for writing is “very intuitive.” What conclusion can be imagined from his associating music and mathematics? “Beauty is crystal, is rationality, is precision, is simplicity… the sublime is infinite: infinitesimal, immense, indescribable.” Purity, coherence, and precision are no doubt the core traits of all of Ikeda’s works.

His technique is also one of variation: his series spectra, matrix, datamatics, A, and also dataphonics are all designed so that his concerts, installations, and performances can be adapted to the venue, the country, the formal constraints, and evolving methods and technologies; for example, there have been some twenty versions of datamatics adapted and presented in Taiwan, Madrid, Tokyo, Bogota, Montreal, and the Grand Palais in Paris. His matrix series has been heard in a red container in the Netherlands, a building in London specially designed by Zaha Hadid, and in an anechoic chamber in Tokyo. One iteration of the A, series, which examines the systemization of the A note throughout history, involved some hundred cars (and drivers), parked and carefully positioned in a Los Angeles garage.

Ikeda has never abandoned vinyl recordings, and recently released several records, including The Solar System, code name A to Z, and music for percussion, all on The Vinyl Factory label.

In June 2018, he was a guest artist at IRCAM’s ManiFeste festival, where he presented three of his works: datamatics, formula, and C⁴I.