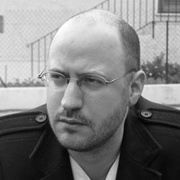 Raphaël Cendo was born in Nice, France, in 1975. He studied piano and composition at the École normale de musique in Paris, graduating in 2000. He enrolled in the composition class at the Conservatoire de Paris (CNSMDP) in 2003, then participated in Cursus (the IRCAM’s computer music and composition course), which he completed in 2006. He studied with Allain Gaussin, Brian Ferneyhough, Fausto Romitelli, and Philippe Manoury.

Working with other composers such as Franck Bedrossian, Cendo developed the concept of instrumental saturation, which he describes as “the result of excess in a limited space” and as “a quest for animality as a rejection of domestication, as a desire to form new territories.” He also sketched out the concept of irradiance, which he developed to describe his aesthetic. Cendo sees his writing style as a bridge to the act of the concert as “ritual.” He describes his third string quartet, Delocazione, as “a ritual, an apprenticeship of dust and grief.”

He has written works for renowned ensembles such as L’Itinéraire, the Orchestre national d’Ile de France, the Diotima Quartet, the Ensemble intercontemporain, Ictus, Cairn, musikFabrik, the Alternance ensemble, the Nouvel Ensemble Moderne, Les Percussions de Strasbourg, the Orchestre Symphonique de Montréal, and the Munich Radio Orchestra. His pieces have been performed and conducted by Miquel Bernat, Alain Billard, Daniel Kawka, Jean Deroyer, Pascal Rophé, Guillaume Bourgogne, Peter Rundel, Georges-Élie Octors, and Lorraine Vaillancourt. Several of his compositions have been performed at major events such as Lille, Capitale européenne de la culture at the Opéra de Lille, the Tremplin Concerts at the Centre Georges Pompidou, the Mito festival in Milan, the Venice Biennale, Radio France in Montpellier, Voix Nouvelles at Royaumont, Présences de Radio France, the Musica Festival in Strasbourg, Ars Musica in Brussels, Why Note in Dijon, and in Germany at the Darmstadt and Donaueschingen festivals.

In 2007, Cendo was awarded the Prix Espoir by the Fondation Francis et Mica Salabert, at the International Composition Competition of the Orchestre Symphonique de Montréal. In 2008, he taught composition at the Conservatoire de Nanterre. He holds degrees in composition, analysis, and orchestration from the Conservatoire de Paris (CNSMDP). From 2009 to 2011, he was a resident of the Villa Médicis in Rome. In 2012, he was a guest professor at the Darmstadt Summer Course and at Voix nouvelles at Royaumont Composition Seminars. In 2009, he was awarded the Prix Pierre Cardin of the Académie des Beaux-Arts and in 2011 he won the SACEM’s Prix Hervé Dugardin. He was awarded a Silver Lion at the 2020 Venice Biennale.

His Graphein (2014), for ensemble is, in his words, “the synthesis of ten years of research into complex sound,” the term he uses to describe multiphonic sounds, which, to Cendo, give “color”, rather than just being simple series of notes. In June 2021, his new piece Double Cheese Passions was premiered during the IRCAM’s ManiFeste festival.

Raphaël Cendo directs the University of Altitude. He currently lives and works in Berlin.