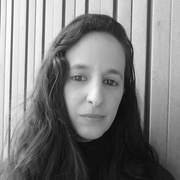 Rachel Beja studied composition with Gabriele Manca at the Giuseppe Verdi Conservatory in Milan, graduating with a Master’s in composition with highest honours in 2018. She has also participated in numerous masterclasses, notably with Pierluigi Billone.

In 2018 and 2019, she was commissioned by the Milan Festival to compose two theatrical works. In 2019, she received commissions from the Milan Conservatory for a saxophone concerto and from Divertimento Ensemble for three new works: for voice, for cello, and for ensemble (11 performers).

In 2020, she was commissioned by the UniMi Orchestra (Milan) and was awarded a prize in the Hertzbreed Competition. She was also announced as the winner of the Hertzbreakerz “The Mechanics of Breath” Competition in Sweden, for which she received a commission for a new work for clarinet and accordion. In 2021, she was selected by Quartet121 (based in New York) in a call-for-scores.

She currently lives in Milan.