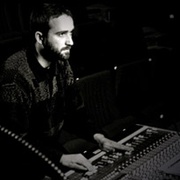 Pierre Jodlowski was born in France in 1971. After studying music at the Conservatoire de Lyon and at IRCAM, where he completed the Cursus (the Institute’s composition and computer music course) Jodlowski founded the éOle collective and the Toulouse Novelum Festival. His compositions are performed in France and abroad, primarily in contemporary art music venues, but also in other performance contexts such as dance, theater, visual arts, and electronic music.

Today, he works in numerous fields: at the edge of his musical activities he also works on visuals, interactive programming, and stage directing, seeking essentially to question the dynamic relationships among different performance spaces. He promotes the practice of “active” music, both in the physical sense (gesture, energy, spaces) and in the psychological sense (evocation, memory, cinematographic dimensions).

Jodlowski has received commissions from IRCAM, the Ensemble Intercontemporain, the French Ministry of Culture, CIRM-Centre National de Création Musicale in Nice, the Donaueschingen Festival (Germany), Radio France, the Orléans International Piano Competition, the Aujourd’hui Musiques Festival, GMEM, GRAME, the Siemens Foundation, the Théâtre National du Capitole de Toulouse, the Fondation Royaumont, the Venice Biennale, and the Polish Ministry of Culture. He has won multiple international competitions, has held a residency with the Berlin Academy of Arts in 2003 and in 2004, and was an associate of the National Theater of Odyssud-Blagnac (a program launched and supported by the SACEM and the French Ministry of Culture) from 2009 to 2011.

From 2017 to 2019 he was an artist in residence at Lux-Scène Nationale de Valence. In 2019, he took over as artistic director of the Musica Electronica Nova Festival, produced by the Wroclaw Philharmonic in Poland.

His works have been played in contemporary sound art venues in France, Europe, Canada, China, Taiwan, and the United States, and are published by Éditions Jobert.

He divides his time between France and Poland.