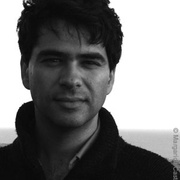 Pedro Amaral was born in Lisbon, Portugal, in 1972, and is one of the most active European composers of his generation.

He began studying composition in 1986 with Fernando Lopes-Graça, at the same time pursuing musical studies at the Gregorian Institute of Paris. He entered the Escola Superior de Musica de Lisboa in 1991, studying composition with Christopher Bochmann and graduating in 1994.

He then moved to Paris, where he studied with Emmanuel Nunes at the Paris Conservatory (CNSMDP), where he graduated with highest honors (premier prix) in composition, awarded by a unanimous vote of the jury. In 2000, he studied conducting with Peter Eötvös (Institut Eötvös in Budapest) and, in 2001, with Emilio Pomarico (Municipal School of Music Claudio Abbado - Milano Foundation).

In parallel to his studies as a composer, Pedro Amaral pursued a university degree from the Ecole des Hautes Etudes en Sciences Sociales (EHESS) in Paris, receiving a masters degree in twentieth century musicology with a thesis on Karlheinz Stockhausen‘s Gruppen in 1998 and a doctorate in 2003, with a dissertation on Momente and the problem of form in serial music. Shortly thereafter, Karlheinz Stockhausen invited Amaral to work as his assistant for certain projects.

During his first stay at the IRCAM in Paris in 1998/1999, he composed Transmutations (which was selected to represent Portugal at the UNESCO International Composers Tribune and broadcast by radio stations around the world, and performed at the World Music Days in Japan in 2001). The city of Porto, which was a European Capital for Culture in 2001, commissioned Organa. In 2003/2004, he did a research residency at the IRCAM, where he wrote Script.

Amaral has been a composer-in-residence at the Herrenhaus Edenkoben, Germany, Villa Medici, in Rome, and at the Lenzi Palace in Florence, Italy. He also works as a musicologist, writing articles and teaching workshops, seminars, and masterclasses.