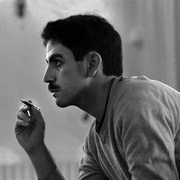 Pablo Galaz Salamanca was born in Chile in 1983. He began his musical career studying classical guitar, then decided to devote himself entirely to composition. In 2010, he earned an advanced degree in composition from the Faculty of Arts of the University of Chile, where he studied with Aliocha Solovera, Cirilo Vila, and Jorge Pepi Alos. He received a fellowship from the French government to continue studying composition at the Conservatoire de Paris (CNSMDP) with Stefano Gervasoni. From 2012-2014 he particpated in Cursus (IRCAM’s composition and computer music course).

His compositions have been performed in Chile and in Europe, notably in several contemporary music festivals, including INJUVE (2008), Acanthes (2009), Villecroze Academy (2011), and the Summer Courses at Darmstadt (2012). In 2010, he was a resident composer at the sixth International Young Composers Forum, organized by the Aleph ensemble. In 2013, he was a finalist for the San Fedele Multimedia Prize (Milan).

His Troubles was performed at IRCAM’s ManiFeste festival in July 2014.