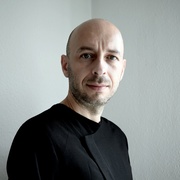 After having taught himself computer music, Pasquet studied composition from 1996 to 1999 at the Anglia Polytechnic University of Cambridge with Richard Hoadley, Trevor Wishart, and Iannis Xenakis. After a brief period at Ina-GRM (Institut national de l’audiovisuel: Groupe de recherches musicales), he turned his attention to contemporary music and digital arts. He holds a doctorate in music composition from the University of Huddersfield and conducts research in non-standard architecture.

Pasquet has been with IRCAM for 18 years as a director in computer music. In this context, he has collaborated with artists such as Florian Hecker, Georges Aperghis, Pierre Boulez, Brice Pauset, William Forsythe, and Rand Steiger, among many others. These collaborations have led him to work for dance, opera, and musical and contemporary theater.

In 2006 with Andreas Breitscheid, he organized the European workshop in the software Max/MSP/Jitter at the Forum Neues Musiktheater in Stuttgart. Pasquet taught interactive art and computational design at the École Nationale des Arts Décoratifs from 2006 to 2010, and at the National Theatre of Strasbourg from 2007 to 2008. He has been awarded several prizes and residencies, including the Villa Médicis hors les murs, two Tokyo Wonder Site residencies, Arcadi, as well as residencies in Chile and Taiwan.

Between 2009 and 2012, he was a visiting scholar at the Universities of Tokyo, Keio and Buffalo. During this time, he began working at Sony Computer Science Laboratories and consulting at Ableton.

In 2017, Pasquet was awarded the Creative Arts Initiative grant from the University at Buffalo, which allowed him to design Lloyd’s Mirror, an in-situ generative installation specifically created for the buildings Martin House by Frank Lloyd Wright and Greatbatch Pavilion by Toshiko Mori. Pasquet worked concurrently at the National Taiwan University of the Arts. He was a part-time visiting professor at the Hochschule der Künste in Bern in 2018–2019 and at the University at Buffalo in 2019–2020. In 2021, he received the Facebook award for “Momentum of AI Creation.”

Pasquet is currently a research associate at the Institute for Computer Music and Sound Technology in Zürich, where he is involved in the European research project FluCoMa.